Today I received an email from a father asking for advice for his son who is a strong player, but a perfectionist. His boy is having trouble handling making mistakes and appears like he is close to quitting the game because of the amount of pressure he's putting on himself to play perfect squash. As I started writing my response I realized that what I was writing about was probably quite a popular issue that good squash players face. This is a psychological issue and something that can be improved. I've included below the email I responded with.


Thanks for the email. Being a perfectionist is kind of how most squash players get to a really high level. We aren’t happy with poorly executing shots in a match and practice them over and over to do better. I remember as a kid always wanting to play a perfect game and playing all shots exactly as I wanted. As a kid I didn’t realize how absurd this goal was. As I got older I learned to focus more on the shot selections. As a kid we often make mistakes playing a poor choice, but as you get more experienced and learn to focus on shot selection you make less mistakes and hit higher quality shots. Shot accuracy can always improve, but when you’re playing the wrong shot it doesn’t really matter how the execution was.

An exercise I’d recommend is having your son chart a professional match and make a note of how frequently even the best players in the world don’t hit the ball exactly where they want it. Perhaps their boast chips the 2nd side wall or they don’t hit their crosscourt wide enough. Even the best players miss their targets at least a few times each rally, but usually get away with it if it’s close enough and they are fast enough to recover. It’s impossible to play a fast paced open skill sport like squash perfectly, but the aim should be more on good decision making and consistency to targets will improve as the practices accumulate.

That’s about all I can offer. Hope it’s helpful. And in final, a break is not always a bad occurrence. Kids have to go through things on their own sometimes so don’t put added pressure on him with your expectations for him. He’s not you and what you would do in his position is very different and should not be compared. Best of luck.


Do you have any other tips that could help someone in this situation? Have you had to learn how to deal with this? Obviously the pressure of competition and playing against another good player will force you into making mistakes. As you improve your ability to reset after points, learn to get out of trouble after hitting a weak shot will all make you better at staying in points you may have previously lost as you were too down after missing your targets on a couple of shots.

When I play my best squash I'm able to not let mistakes bother me at all and focus only on shot selection. If my shot selection is good I can live with the outcome. Some shots are just difficult and given that same situation and shot 100 times maybe I would make it more times than not, but a strong player can play higher percentage shots where they have very imitated risk and because of this can execute the shot with more confidence. 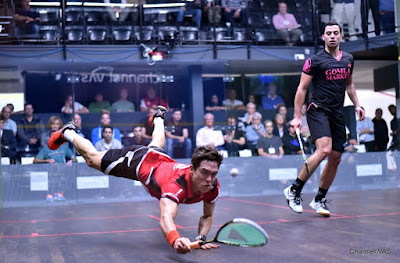 Being able to commit to the shot you hit is a sign of confidence and something you you are going to have trouble doing if you are playing a low percentage shot or tired, or even physically and mentally fatigued. So technique and accuracy in solo hitting is great, but it certainly isn't the most important trait of a top squash player. If you've read the recent article about Dessouky after his loss to Rodriguez you'll know what I mean. Fares is the most technically and physically gifted squash player on the planet (possibly 2nd is Ramy is healthy), but still he lost to a basic, super fit and mentally strong squash player, Miguel. Rodriguez was prepared to go further for the win and this made the difference. It really demonstrates how critical the mental game is from being a perfectionist to being able to bring your best squash on each and every day at the highest level in the game. Enjoy and embrace the challenges and lessons that this sport teaches us. Anyone can become mental giant with practice and discipline, just like acquiring any other skill. Miguel demonstrated that pure tenacity and determination can be victorious even against the very best in the world!

SeriousSquashShop.com is home to 2 squash instructional films and loads of merch!