Off court off-season summer training has changed a lot over the years. When I was young a lot of people didn't even play over the summer, but eventually the competitive nature to get ahead in the game led to the need to train pretty much year round.

I always enjoyed having more time to focus on training off court during this time of year. Over a 3 month window you can make a significant impact in a specific area of your training. A lot of people think they need to be fitter so they take up running or cycling. If that is an area that is holding you back that makes sense. But I believe that strength training for most squash players is what we should be focusing on.

Professional squash players are more stronger and better overall athletes than they used to be. They aren't built like marathon runners anymore as the game is far more explosive. I know when I was younger I could do all the endurance training I wanted, but I should have done more to get on the ball faster and in a more stable position. As you get stronger you can also improve the pace you can generate and the distance you can stay away from the ball which makes the court play smaller. Additionally strength training can help you avoid injuries. So much of what should you do? 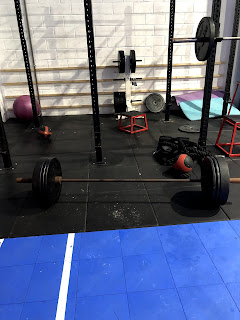 In season I recommend 2 strength sessions per week. Obviously they may not be as encompassing as off season sessions, but it's important that athletes are not only maintaining their strength gains over the summer, but that they are increasing it during the season. A week with a competition I would probably only have 1 session early in the week. During the summer I'd like to see 3-4 strength sessions per week. Of course this depends what else you're doing and how hard you're pushing yourself.

So what type of strength training is not good for squash players? Well you don't want to be too big like a body builder obviously. You need to maintain proper mobility without adding too much mass to carry around on the court. So when you are doing reps you would want to do 5-15 reps of most exercises. Those wanting to get a lot bigger you are looking at higher weight and lower reps. I also personally enjoy doing exercises that use a multitude of joints, so it's more geared towards core and overall body strength gains. Bicep curls are really not going to help your squash game and that's what I see most men doing in the gym.

I remember being told when I was younger that if I didn't have a lot of time at the gym and I could only do 3 exercise I should do benchpress, deadlifts and squats. I believe this is still good wisdom. Obviously you can add in some other exercises too. Over the past couple of years I've done a lot of work with kettlebells. Swings, getups, carries, deadlifts, squats, split squats, etc can all be done with kettlebells.

My trainer back in Canada gave me some tips when I was moving away and said to always try and include the following types of exercises: hinge exercises (like a squat or deadlift), explosiveness (which is something that cannot be done slowly), push/pull exercises and carries. The goal is to include at least one of each of those in each of my sessions. My trainer also said I should be focused mostly on the posterior chain, so doing deadlifts and swings. He said most people focus too much on squats and improving quadriceps strength and omit the hamstrings. So this summer I've been doing 2 posterior sessions per week and 1 squat session. You can obviously do squats and deadlifts in the same session if you like too. Basically all of these exercises are also keeping your core engaged and will vastly improve your core strength.

So during the summer you could do strength sessions every second day and between those you could be on court or doing some cardio. If you're pushing yourself hard in your strength sessions you are likely getting some cardio from this too. I always tried to keep on court at least once per week in the summer, possibly twice. It was always a good time to solo hit as well because you can do this later after your strength workouts. It's also when the courts are generally quieter so it's easier to get an hour to solo hit.

Do you write out your summer training? Or do you have a weekly routine? I definitely think this is a good time to set some goals and to understand why you're doing what you're doing. Some of my best seasons were set up from a good base of summer training that included hill sprints once or twice per week and 2-3 strength sessions and 1-2 on court sessions. The trick is how to keep some of that training going once the season begins. The question will be if your gains are sufficient enough that you only to sustain them or if you still want to see more improvement. If you're only looking to sustain you can cut back to once per week when the season hits.
Last point is that I highly recommend working with a trainer or signing up for some strength group classes. Knowing how to do everything safely and correctly is very important. They can also push you harder than you can normally push yourself. If you're serious about your training this is a good investment. I know they are more expensive than squash coaches, but it's a critical part of the sport now. It's a tool I wish I had available to Mme when I was a junior.

Hopefully this gives you an insight into some of the things I've learned over the years from my own training. If you want specifics it's best to get it straight from the horses mouth (a good trainer). Maybe now you'll see the importance of what it is. Or will you try and mimic Paul Coll and try out Crossfit? It's not for everyone and you already need a good strength athletic base to perform some of those exercises properly and safely.

Okay that's it for today. Other Serious Squash updates:
Serious Squash Signature Harrow Racquet is coming out this summer! You can check it out and place a preorder at SeriousSquashShop.com
Squash Shots is a new coaching platform where you receive weekly exclusive coaching videos from me. A subscription starts as low as $3/month and I've just posted episode 6 today. If you'd like to learn more you can do so at Patreon.com/SeriousSquash Members also get free downloads of previous released Serious Squash films and a discount on the new Serious Squash racquet. Alright time to get to my gym session!
Posted by Chris Hanebury at 10:17:00 AM 3 comments:

What Squash Shots Is All About

It's been a busy first month in Turks and Caicos. As most of you know, I've started a membership based weekly coaching video platform on Patreon. Want to see what Squash Shots is all about? I put together a short clip on some of the videos I've filmed so far. Here it is:

Also, the new Serious Squash Signature Harrow frame will be released soon! Preorders have already begun. This one of a kind music inspired racquet will definitely get lots of attention around your club. The Vapor is also a great model. If you'd like to grab one you can do so at SeriousSquashShop.com

Stay tuned for another update on life in Turks and Caicos...coming soon!
Posted by Chris Hanebury at 7:20:00 AM 2 comments: