Watching the British Open this week, I've decided that today I'm going to discuss some of the great parts and not so great parts of the 4-wall glass show court. The glass court is much superior for viewing, both on TV and live. It is also incredibly unforgiving if you are missing your targets. While on the flip-side it can be equally rewarding for well executed shots. 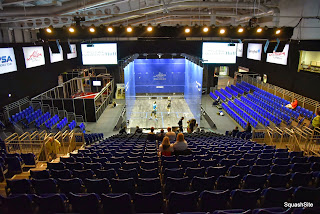 As I've been watching the British Open this week, it's evident to see the difference of people with more experience on glass courts. Of course there have been a number of upsets on the women's side, but most of those have been on the traditional courts. I've watched at least parts of 5 or 6 women's matches on the glass court and this is what I've decided to discuss today.

As I mentioned above, the glass court is not very forgiving. If you're not hitting your targets the ball will be squirting out loose. And I've noticed that for the most part in the women's game that this has happened very early in the rallies; often after 2 or 3 shots. The challenge here is that once the court is opened up I find that in the women's game the rally is rarely ever reset. The women are too good at finishing off the points and in general the women aren't as explosive as the top men to make up for a poor shot. So I've found a number of the women's matches thus far to be one sided. I've felt embarrassed for some of the women out there. They are top 20 or 30 in the world and losing games in 5 minutes or less. It must be quite frustrating and a blow to their confidence.

In one first round match between Nicol David and Tesni Evans this trend seemed to be continuing, at least for the first 2 games. As Evans adjusted to the court she really played some excellent squash and pushed David to 4 games and it was highly entertaining. It demonstrated that the slightly lower ranked women can adjust and compete with the top ranked women and in the end entertain us; which of course is the objective for us watching. We don't care if it's men or women if we see good, hard fought rallies. 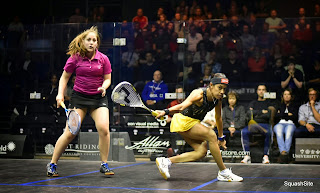 So how can the WSA improve the quality of their glass court matches? Obviously the biggest thing is experience. The women that are lower ranked have to battle through qualifying and rarely get a match on the glass court. I'd estimate under 10 matches on a glass court per year for women out of the top 15 or 20. If you compare that to David, she probably gets 50+ annually and also gets more practice on one back in Malaysia. Imagine if Evans has the same luxury? Imagine if all the women had that luxury? Certainly that's part of the experience that is so valuable on tour. The game is much different on a 4-wall glass show court.

In the end, the WSA, (well now joined with the PSA) is a business. If they want to improve their product they need to make glass courts more common place for all the women. This may mean making a push to have glass courts in countries where all the top women are from. This may mean not overlapping men's and women's events so that all of the matches (including qualifying) are played on glass courts. This could at least be done for major events. They could also have 2 glass courts at major events. I know it's getting expensive now. But I feel some of the matches so far on the glass courts have been pretty poor quality. I know the women are super talented, but they aren't able to play to the best of their abilities on the biggest stage (excluding the top few). It's a shame really.

You see this with the men as well. Canadian legend Shahier Razik is a perfect example of someone that as always struggled adapting his game on the glass court. The difference is that Razik can at least get more balls back and have some rallies even if he does go down.

I think glass courts are the future of the game. Hopefully we get more permanently built into squash clubs in the world. Surely if someone wanted to play professional, they would benefit from spending extra time on these types of courts. But of course they first have to make it through smaller tournaments to get a high enough ranking to play in the big events which have the glass courts setup.

I think as we get further into the tournament the caliber of the women's matches not the glass court will dramatically increase. David and any top Egyptian is always an entertaining spectacle. I want pro squash to look like pro squash. I know it will improve with time and experience, I just hope it doesn't do more damage than good for some of the women that have been steamrolled thus far.