It's amazing how much more active I am on my blog when I'm home sick! Anyways, today will be one of my more subjective topics to date. I'm going to talk about the Olympics and a major reason why squash is not included. This reasoning will never be verbally acknowledged by the International Olympic Committee, but the more I think about it the more I agree.

Growing up watching the Olympics there are a few things that have stood out; Jamaica sent a bobsled team, the figure skaters Tonya Harding and Nancy Kerrigan story, while Canadian figure skating pairs Jamie Sale and Davide Pelletier were temporarily robbed of gold medals by a corrupt French judge; who can forget the Ben Johnson (pictured below) scandal or more recently the American runner Tyson Gay who just got his entire teams relay race silver medals taken away because he was later found to be doping. Furthermore, I recall a Chinese gymnast lost her medal because they lied about her age and was too young to compete. While I also remember badminton teams being kicked out for not playing to their ability. I also remember some controversy with the Canadian women's soccer team, but of course there is controversy in soccer. Could that be why it's so popular? 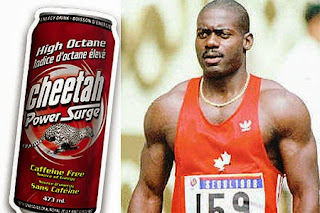 These are just a few of the stories, and like for most of you, these are the most memorable Olympic moments of my lifetime. Of course there are always other controversies when you have judging involved. And I can't go on without saying that I do recall Canada winning a couple of gold medals in hockey, but that was just because I'm Canadian. I'm sure globally those accomplishments have long been forgotten.

So what is the point of all this? Well where does squash fit in? I don't remember hearing any controversy in squash since Jonathon Power retired. Not that I condone how Power carried himself on court, but he definitely spiced things up a bit. In tennis there was controversy about Nikolay Davydenko potentially gambling on tennis. Not that this makes the sport better for tennis players, but it sure does shine the spotlight on a sport in the American culture. Same when Serena verbally abused a line judged who called her for a foot fault. And I'm sure many of you have seen the video clip of Mikhail Youzhny who smashed his racquet on his head repeatedly until he started bleeding.

For people not involved in squash, nobody cares who wins and what country they are from. Maybe if there was someone having an affair it would make a sportscenter. The video of Cameron Pilley hitting his brother in the back with a squash ball probably garnered more interest from those outside the squash community than any single accomplishment from a player on tour. Beyond that squash doesn't have a bad rap for cheating or controversy. As a squash player this wouldn't make me enjoy the sport more, I certainly am not hoping for it. But this does make me wonder how this would grow the game we all love.

How badly do you want squash to become more popular and make it into the Olympics? Do we need corrupt officials and people caught doping to get capture a bit of the spotlight and gain some public interest? Honestly, this would probably all do wonder. For those that have never played or heard of squash, watching a few rallies of the top players in the world likely wouldn't impress them. The same goes for if I watched biathlon, figure skating, gymnastics, diving or so on. But when we hear that a judge was paid off or someone cheated somehow we all want to watch and see what happened. We want to see for ourselves how someone was corrupted, likely by money or fame. This allows us to think about how much better of a person we are. Of course we would never do that type of thing, which is exactly why we want to watch it. Just like a good action movie or book, the more laws and rules broken the more entertaining the story.

So do we need to sell out the sport we love somehow so it gets the recognition it needs? Or would this just be unwarranted attention? I know in Canada there would be a lot more funding for players and coaching if squash made the Olympics. It's hard to argue against that being a good thing.

Well there you have it. I'm sure one day squash will have someone or a few that will stir up the pot. Will we have a Josh Hamilton that constantly relapses? Will we have someone tamper with equipment like the Patriots did? Will someone bribe an official like in the figure skating scandal? Will someone have an affair like Tiger Woods? Will a player gamble large sums on squash like maybe Davydenko in tennis or Pete Rose in baseball? In North America most of the MBL season discussions have revolved around Alex Rodriguez. Who doesn't want to watch know? Probably most hoping he fails.

Will a top squash player get caught doping like Ben Johnson or a zillion other baseball and football players? Will someone date a celebrity like most of the pro sporting athletes? Is the reason this isn't already happening because there is no money in professional squash? Or is some of it already happening and it just doesn't get investigated and reported on a mainstream media outlet like all of the other scenarios I've just mentioned? So do we need ore money in the sport to have more scandal? It feels like the chicken and egg dilemma.

I like the fact that our sport is about the love of the game and that we haven't had people like Alex Rodriguez, Barry Bonds, Mark McGuire or Jose Canseco (pictured below). These people are famous for the wrong reasons and while chasing bigger paycheques tarnished their reputations. I believe that in doing so these athletes have helped increase interest in their sport. If some of these things do begin happening in squash, it would likely increase our exposure and improve our chances of getting into the Olympics. 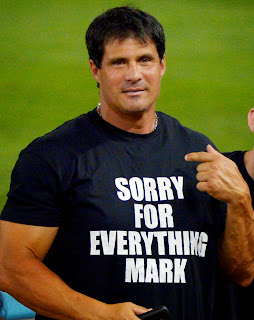 Do you want to see this type of behaviour and scenarios on the PSA tour? If we have unbelievable ambassadors like Ramy Ashour and Nicol David at this time and still can't get into the Olympics, what chance to have with future generations?

Would cheaters and controversy taint our sport? Of course. But would this grow our sport? Without a doubt. Would this give squash the drama piece that many other sports have? Likely. Perhaps this would give people on sporting shows something to debate and potentially get squash into the Olympics. In closing it leaves me with a difficult question; how badly do we want squash to increase in popularity and be included in the Olympic Games?
Posted by Chris Hanebury at 11:36:00 AM