Today I'm going to talk about how using imagery can improve your confidence, body language and demeanour and overall performance on the squash court. I've previously discussed the importance of imagery for visualizing yourself playing high quality and winning squash as well as handling challenging situations successfully. Today however I'm going to talk about a completely different use and type of imagery and for a separate purpose.

I was generaly a pretty quiet and polite person; yes being polite and a good person are Canadian qualities that can interfere with us playing our best squash. Many people (myself included) have been psyched out and our focus too external before and during a match. We think about how good our opponent is instead of focusing on our own game and what we can control. Sometimes in the match we go well out of our way to avoid contact with our opponent and apologize for hitting a good shot. There are many examples of these types of gestures that go on unnoticed. Most people if they do notice, would just say that it's good sportsmanship being displayed. Although this may be true, for me the issue is too much respect on general focus is displayed onto your opponent. I see many people (especially juniors) with their shoulders slumped and head down. You can read their negative body language and low self-efficacy a mile away.

I want to be clear here that I am not condoning arrogance or poor sportsmanships. But there is a line in between and I believe that most Canadians lie heavily on being overly polite and proper which hurts their squash game. In sports such as basketball we see, well hear trash talk from top players. This isn't what I'm condoning either, just an example of their outwardly competitive nature. My point is that this type of confidence and self-assurance goes along way towards playing to win and shows that you're not intimidated by your opponent.

In squash and tennis this doesn't happen. We say 'good shot' and apologize for hitting nicks, plus we give away strokes and hand outs lets if there is the slightest bit of interference. We almost feel bad for winning if we do and certainly don't want to bagel anyone. There is clearly a lack of aggression and confidence reflected with this type of behaviour.

So I bet you're wondering, how to draw that line and become more assertive, while still being a good sport? It can be done. Tiger Woods doesn't cheat, well not in golf anyways. And Tiger is ferociously competitive. The same can be said about Kobe Bryant and Michael Jordan who were both known to talk a little trash; the greater their opponent the more they loved the challenged and wanted to go one on one with that person. They were well respected and didn't do it to show up their opponents, this is just their competitive nature which is what drove them to become legends. I would say the same goes for Ashour and Shorbagy as well as many of the top players, they just don't verbalize their thoughts and emotions but they certainly go on court with positive body language. This isn't always an easy thing to have if you have lost to someone before or after you lose a few points.

So how can you improve this part of your game? I like using associative imagery along with positive self-talk statements. It may sound silly to some of you, but try it and you'll feel bigger than your body and more confident going onto court. Here are a few images that you can visualize before or during your match. 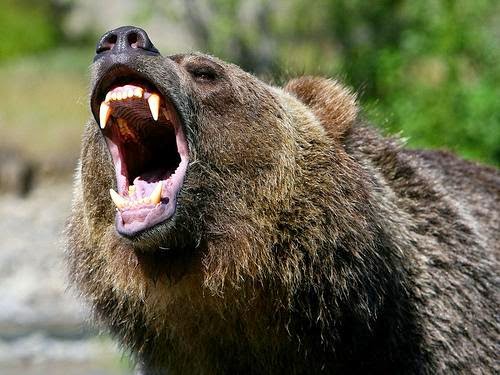 Don't be afraid to express your emotions and play fearless. Nobody dares mess with a black bear.

King Kong thumping on his chest is a very powerful image. Try doing this or imagine yourself doing this before you go on court. It can dramatically change how you think and feel about yourself and your game. Get your tail up, shoulders back, chest out and head up. Exude positive and winning body language.

The king of the jungle takes no prisoners and doesn't back down to anyone no matter what. Even if you have to take on someone that is way out of your league the lion would never go down without giving it his all.

These are a few examples that I find quite powerful. Do you play like a lion? Or are you more like a turtle hiding its head in it's shell when the going gets tough? This is what normally happens to juniors. If you normally play like a dog with its tail between its legs maybe you need to be more ferocious and look to see what really lies inside of you. Do you want to win? How badly? Do you want to be the best you can be? Why do you train so hard and put in all that work? Just to hope you will win or to go out there and make it happen? If you want to play your best and exude confidence play like a giant and you'll feel like one.
If you are a quiet or introverted type of person this approach may be extremely beneficial to your game. Meanwhile if you are already an overconfident, arrogant person maybe you need to imagine yourself as some cool, easy going cat or person. For most people I've seen and coached I think getting more amped up and confident, getting your tail up type of imagery and self-talk would do them the most good.

Try and picture your primal instincts. Are you a fight or flight type of person? How do you instinctively react in challenging situations? If your instinctive response is flight you will likely need to work at this to get comfortable on court. I think this is something that can be learned and trained. So for those that feel uncomfortable in competition there is hope. Try using associative imagery and recite powerful statements about yourself. When I found myself doubting my ability I would think back to all of the years of hard work and hitting balls. I would tell myself that I had been preparing for this moment and to play squash my entire life. You can try this or something similar. At the very least going out and having a plan or just getting out of your own head and letting your natural ability take over is your best chance.

Again, I feel like I have to reassure people that there is a line here. You aren't doing this to intimidate, just to focus on your own game and that you are playing to win. Most of us are more concerned about our opponent and we get psyched out and don't let our true emotions show. Of course you have to be able to control your emotions and still play smart. Find a balance and find what works for you. You don't need to behave like John Mcenroe to be successful. Don't expect your opponent to give you the game, go out and win it. Take no prisoners.

Wanting to be the best is normal and a healthy way to think and has driven many to the top of their field; they didn't become the best by accident or by hoping they would, they knew they would. They had the desire, belief and confidence in their ability. You have to believe that you can and will win to become a champion. Play within the rules, play fair, play with confidence, back down to no one, play to win, play fearless and play like a beast!