Hit It Tighter: Using Your Body As A Frame Of Reference

It's been a few days since my last post. It's taken more extra time than normal to put this one together. It's an interesting topic and I was trying to find the best way to explain it. Today I'm going to talk about body alignment when setting up to hit the ball straight. I'm going to concentrate on the hips, torso and shoulders. If we want to hit the ball straight and tight, parallel to the sidewall we can best achieve this by using our own body as a frame of reference. Good players make it look so simple, but it takes thousands and thousands of hours to be able to read the receiving shot correctly and position your body optimally.

Let's start off by talking about how our feet, hips, torso and shoulders are used as a frame of reference. You can see a good example by James Wilstrop (below). His shoulders are slightly open to the front wall, but his feet and hips (and belly button) are pointing (squared up/parallel) to the sidewall. This means if Wilstrop hits the ball at the right moment (depth) he will hit the ball in a straight line, tight to the sidewall. 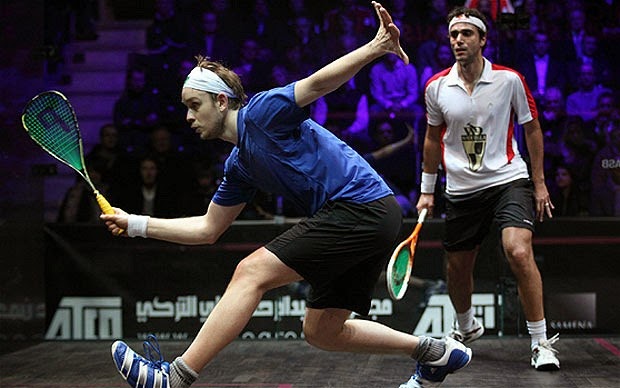 The feet: when you contact the ball, as often as possible you want to place the ball exactly where you want it. The right distance between you and the ball off of your foot your striking the ball with. Out of the back forehand corner you also often hit the ball between your feet, or just slightly more towards the lead foot. The reason why we can't rely on our feet to ensure the rest of our body is in an optimal hitting position is because you can rotate your hips and torso which can greatly change your setup I'm not going to go into too much detail about this because I've already written a post on this topic here http://www.serioussquash.com/2014/09/tee-it-up.html

The hips, shoulders and torso: your feet are important frames of references, but your hips, torso and shoulders is what allows a good player to hit the ball so consistently tight. The goal here is that during the setup the body is parallel to the side wall. On the forehand side, the shoulders should be parallel during the start of the downswing, but will be rotating open prior to contact. So if you strike the ball with this type of setup and on the 'tee' (as listed above), you have a great chance of hitting a very accurate and tight drive.

The challenge I find with most people is that the squash swing is rotational (along the transverse plane) and most of us have a tendency to pull off the ball meaning we don't finish our swing before hitting. It is challenging to lineup a rotating swing and hit the ball parallel to to a fixed object (the sidewall). Frequently we never get set up properly or we are trying to get out of the way and move back to the T prior to making contact with the ball. When we do this we hit the ball with our hips or shoulders too open to the front wall. If you place your racquet along your shoulders with the butt of the racquet facing the front wall, we can think of it as an arrow. The butt of the racquet then shows were you're aiming. The more your shoulders have rotated open prior to contact the more likely you will want to hit a crosscourt because that's what your setup for. The trick here is that if your shoulders and torso start rotating before you racquet begins moving forward you will be too open at contact. It is important that your shoulders are rotating open as your racquet is swinging forward (coincides with the downswing). Be sure you hit through the ball and avoid early excessive amounts of torso, hips and shoulder rotation.

What I've discussed above is most common on the forehand side. Most people hit the ball pretty squared up to the sidewall (with their shoulders) on the backhand, except for 1 shot; the straight volley drive return of serve.

The forehand is where most of us falter and is part of the reason we see so many loose drives both on the volley and the bounce. This is a big reason we tend to see more shots being hit crosscourt. If you hit the ball on your back foot (open stance) your shoulders and chest have a tendency to be open. Remember the racquet along your chest/shoulders. Where is it pointing when you're lining your shot up? Even if you have your lead foot pointing to the sidewall and you feel pretty squared up you may not be. Here's another way to check; where is your belly button pointing? If it's pointing towards the front wall you are too open to hit an accurate straight shot. If you can rotate your torso and get your belly button pointing to the sidewall you are now squared up to the sidewall and will likely be much more accurate with your straight drives and drops. Make sure you are lined up properly with your shoulders as you start your downswing.

As I briefly mentioned earlier, another issue many people have is that they begin their swing squared up to the sidewall but their shoulders open up too early as the pull off of their shot. Which again means the ball is more likely to pop out loose. When you pay more attention to this you may start to notice when you're shoulders are too open prior to contact, this doesn't always mean you have to hit crosscourt now, this just means maybe you should take a bit of pace off the ball and place the ball because your accuracy won't be there if you try and hit it hard when your setup ins't optimal. 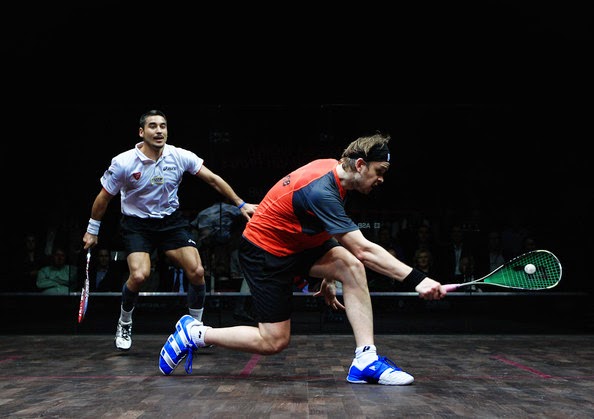 How open should your shoulders be at contact? This is a tricky question. On the backhand you want to be squared up at the point of contact (like Wilstrop has done above). Even though Wilstrop is hitting his backhand moving slightly forward and off his back foot (open stance) he is still able to keep his hips and shoulders squared to the sidewall at the point of contact. In a fast moving sport like squash, it's easy to see why this is such a challenging feat. Anticipating where to move to get the body in the optimal hitting position. The more consistently you can do this the more accurate you will hit the ball.

How open your shoulders should be at contact on the forehand this depends if you're moving forwards, across or backwards to the ball and which foot you are hitting with. You also rotate your torso and shoulders more on drives then you do on drops. If you're hitting a forehand volley with an open stance and moving forward slightly into the shot your shoulders will be slightly open to the front wall. The key here is to make sure you turn and hit beside you. You can see below that Chris Simpson has turned for his forehand volley and is squared up beautifully to his shot, but as he starts to swing his torso will naturally rotate along the transverse/horizontal plane. Many amateurs here will have their chest and shoulders parallel to the front wall here and because of this they tend to hit a loose (straight?) shot or just hit it crosscourt. Just saying to hit the ball straighter will only be an effective strategy if the person is in a proper position to do so.

We have a nice example of Chris Simpson squaring up his hips, torso and shoulders on a forehand volley. Even though Chris is hitting from an open stance position his body is still squared up to the sidewall and this will allow him to hit the ball tighter by using his body as a frame of reference with the sidewall. An additional benefit from this is that Simpson is able to stay further from the ball and closer to the T. This means Simpson will be just a skip step and back in position. 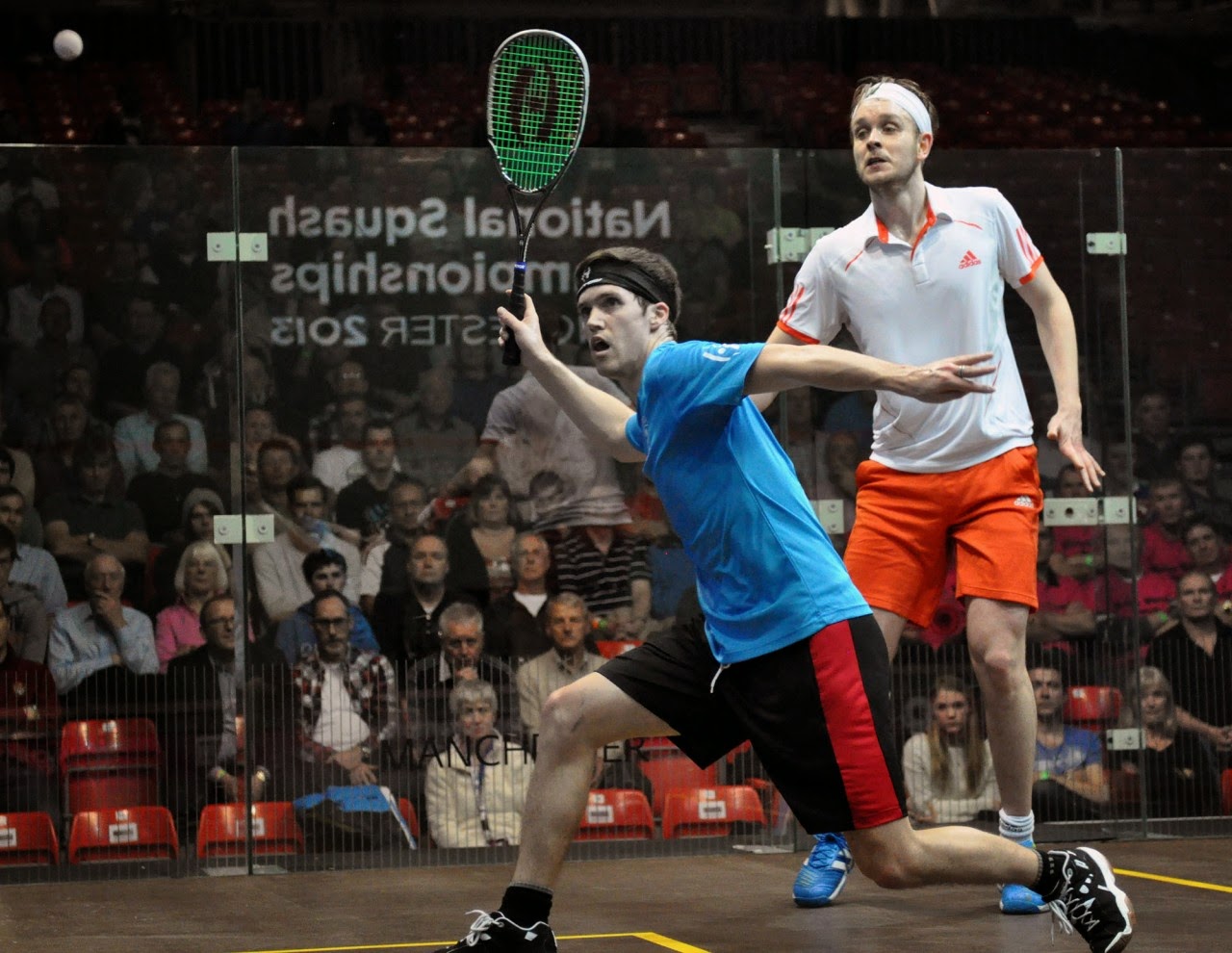 I can't finish off this topic before mentioning that another reason people rotate too much prior to contact is that they are too close to the ball. If you are too close to the ball you have to open your torso and shoulders up to get your racquet squared up to the ball. This happens a lot under pressure off a good 2 wall boast and on volleys off of a crosscourt drive. Proper spacing will allow you to square up your hips and torso to the sidewall.

At a very high level players can use their forearm and wrist to get the racquet running parallel even when their bodies aren't squared up properly. Some people rely on this (especially ex-badminton players) as they have a strong wrist. Sure, they still may be able to hit a pretty decent shot slightly out of position, but they will be better off if they can get their body positioned properly to take a regular swing.

Advanced players can know that their opponents watch their shoulders for anticipation and this can be used against them with deception. For the average club player I wouldn't focus too much on deception with your shoulders until you can square up properly for straight drives and drops on both sides of the court. But as a strong player progresses this can be a method for deceiving your opponent. The accuracy won't be quite as high, but they get away with it if they deceived their opponent.

In conclusion, think about the angles of the body and the court. How can you get your racquet running parallel longer through the contact point? If you rotate your torso too early or don't set up squared up to the sidewall you will have a lot of difficulty hitting the ball tight. Do you hit crosscourt too much because you're out of position? Where's your belly button pointing during your setup and at contact? Are your torso and shoulders opening up before you start your downswing or are they synched effectively? Practice your body positioning the next time you're solo hitting or doing some basic repetitive drills (like drop-drive, or boast-drive).

The next time you watch the pros play watch their shoulders, hips and torso during their setup and at contact. See if you can pick up how they use them as frames of references to the sidewall to hit the ball so accurately. You may also notice how challenging it is even for the pros to hit the ball tight to the sidewall off of a very loose ball. They don't practice these shots very often and it is more difficult to time the ball and position themselves at this angle (because it isn't just completely parallel to the sidewall anymore). You may also notice when they use these parts of their body to disguise their shots.