I know it's been over a week, but I'm back with another post. Today I'm going to talk about how to change your T position. I find most men's and women's A and Open players hang pretty far back on the T. Most good players have been taught to hit the ball deep from the back of the court. Then all of the sudden they will play someone who attacks well from the back of the court and they will have trouble adjusting their T position. I also find that most B and C players hang far back on the T because they simply struggle getting the ball out of the back corners. While many beginners don't get to the T at all, they just sit and admire their previous shot.

At an advanced level the T floats. When you hit a pressuring shot your opponent will be limited to what they can do next and you should poach your T positioning accordingly. But before you get to this point you need to just learn to get back to the T as well as where on the T you should be trying to get to. For me, I can get to any corner in 3 steps (4 if my opponent hits a great shot) from the midline and the middle of the depth of the service boxes. You'll see in my picture below that this spot would actually be just below the circled T outline. So the centre of the court if you move properly to the ball is not exactly the T line. 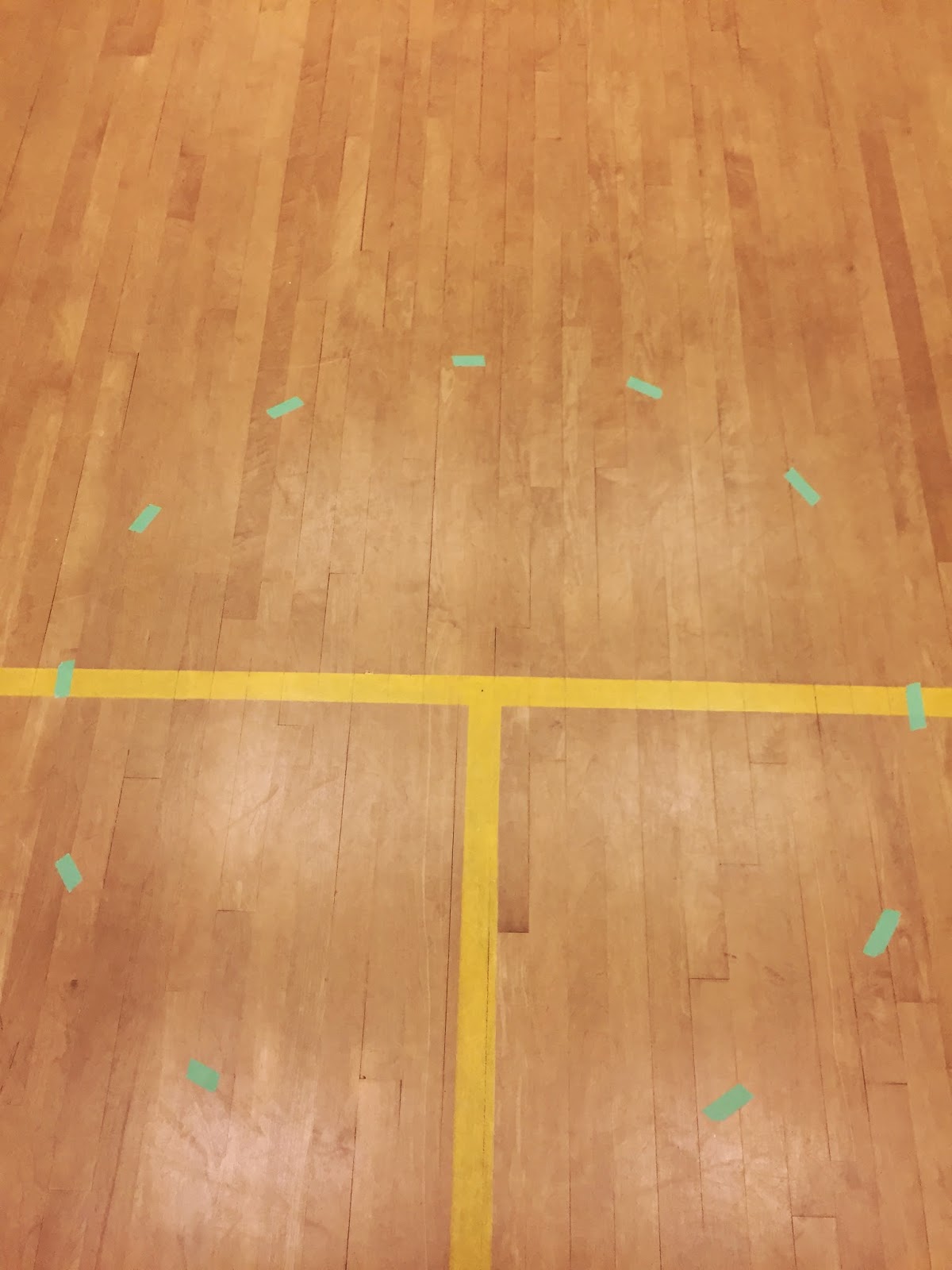 So why do I have tape higher on the T than one would normally want? For a few reasons. I simply took a racquet from the T line and rotated it around in a circle and put a little piece of masking tape to outline the diameter of the circle. I was having trouble with kids getting back to the T after they hit, especially from the front of the court. They kept dropping from the front and standing over it. So we played rallies where if they didn't get back into the circle by the time their opponent hit the ball they lost the rally. I had never seen them move so fast! Of course I realized quite early that this could also be dangerous. If a kid hits the ball into the middle and they are trying to run there anyways. Therefore I had to make sure they called their lets and gave up the point if they hit the ball back through the middle.

Ok, so what else does this taped area do? Well for one I noticed that the kids had to change their shot selections to make sure they could get to the T in time. If they boasted or dropped they had to get to the T even quicker than normal. The nice thing about this is they made that change without me telling them to do so. The kids generally hit the ball deeper and higher to give themselves time to get back to the T. I want them to stay aggressive when the opportunities right and go short, but they need to be able to cover the next shot if their opponent gets it back into play.

Ok, so who else would benefit from doing this? The people I talked about first in my introduction. People that hang too far back on the T. You may get away with this against most of your opponents, but when you come up against someone that is more attacking you will likely struggle to move your T up if you haven't practiced doing so. An added bonus of moving your T position up is that if you volley you are taking the ball earlier and your opponent will be further from the T. You're also closer to the front wall and your volley should be more accurate. When people hang around the back of the service box for their T positioning and step across to volley, most of the time their opponent will be back in front of them by the time they hit their volley. This puts a lots more pressure on the shot and normally means you are better hitting the volley deep once again.

This is just one example of how you can mark the T area and make games more fun and challenging. You can also just look for a little marking on the floor as your targeted T positioning and check every so often to make sure you aren't getting deeper and deeper. If you get used to playing a bit higher up on the T you'll be faster to the from of the court, hit better volleys and you're footwork and speed into the back corners will improve. You will also likely try and volley more to maintain this advantageous court positioning.

In closing, this is something you can play with. You can make the area larger or smaller. You can have different markers depending on which shot is played. In a future post I'll talk about learning to move your T positioning based on your previous shot and your opponents options. Also in the near future will be some posts on tactics. I'm going to talk about what strategies you should implement when you're playing someone that is faster, hits it harder, is a stronger or weaker player in general.
Posted by Chris Hanebury at 10:02:00 AM