Yes, 2 posts in 2 days! That's what happens when I actually get a day off :) I think you're going to find today's post pretty fascinating as it's about something I believe its revolutionary in terms of organizing and running a junior squash program. Let's see if you agree.

Relinquishing control as a person in charge of others can be an extremely challenging thing to do. We are brought up through an education system that tells us what to do, what we should learn and how to behave. Imagine a classroom where a teacher told the students they could do anything the wanted in class! Kids are young and how could they know what they should be doing? Because what they should be doing isn't going to match up with what they want to be doing. We feel like we are assisting with their development as we tell teach them what is right and wrong and what they need to learn to lead a happy and fulfilling life. Kids must be exposed to a number of different subjects, sports and activities; kids don't get many choices these days, yet somehow we expect them to be able to make important life decisions later on in life and to enjoy us always telling them what they are going to do next. It's no wonder kids live on their phones these days! We mean well, we want to help our kids and share our knowledge so they can learn from our mistakes. It's a great feeling to help others, but I believe that sometimes less is actually more and can actually assist with their development. Today I'm going to discuss a new practice model I'm currently experimenting with the kids that I coach.

I bought a book a year or so ago called 'Drive: The Surprising Truth About What Motivates Us' by Daniel Pink (pictured above with a link to it on Amazon). As a coach I know motivation is the most important factor for a kid loving sport and wanting to dedicate extra time and work hard to become the best they can be. Many of us love squash for a variety of reasons, but I'm always curious how I can increase motivation with the athletes I work with so they will not just enjoy squash, but love it. If a kid is motivated they will work harder and in the end set more challenging goals while improving their chances of attaining them.

When I was a little kid I played my first squash tournament at the age of 9. My home club in Pickering, Ontario just happened to be hosting the Canadian Junior Nationals. I signed up for the boys under 12 and I had no expectations because I didn't know what the competition would be like. To my surprise I won the consolation and realized I was actually pretty good at squash which I had jus been playing with my family recreationally. I was a small kid so contact sports weren't up my ally. But after realizing that a person of any size could be a good squash player I began a journey to become the best I could possibly be. I was probably the most motivated and hardest working kid and the following year I started winning most of the tournaments I entered. I would do anything anyone told me to improve my squash game. I wrote daily in a journal about squash (pictured below with the very legible handwriting!), I solo hit for an hour or more almost every day and I had a home gym I used all of the me even though I didn't necessarily enjoy training. 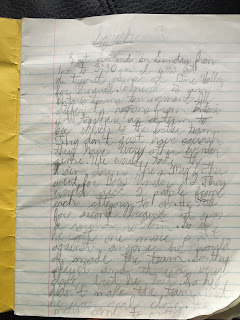 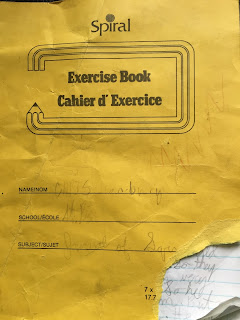 So what does my previous experience have to do with motivation? Well, basically I had no idea what it took to become the best I was just so highly motivated. I wasn't working with national caliber coaches and I didn't belong to a group setting program like the one I currently run. I didn't have court time set aside for me each day. I became the best because of how much I loved squash and how badly I wanted to be the best. I wonder how many kids go through a similar phase like this when they are young. It got me thinking about telling kids they have to be at practice and that today we are going to do this or that and this is how I want it done. It got me thinking that maybe it was the way junior squash programs are being run that is the problem. Maybe if I backed off a bit and let the kids decide what they wanted to do and how they wanted to do it they would enjoy practice more and in turn be more motivated and engaged with their learning process.

Well this is the concept I am now playing around with and have learned from the book, Drive. Every Tuesday for the past month I let the kids pick and choose what they want to work on. I will still pick who they work with so there is still interaction among all of the team members, but after that they run the practice. I bring out the ball machine and the other coach and I tell them we are at their disposal, that they can use us for feeding, running a drill or for playing a game with them. I'm still thinking of ways to tweak this so it works best, but I believe that if a kid is engaged at practice no matter what they doing they are better off than doing something that I tell them to do and that they do not want to be doing.

At the beginning I was very excited about the concept and I read how much companies have advanced because they give their employees more autonomy. I began to think about the possibilities of implanting this into my training and wondered how it would influence the kids. The first time I tried this I think a couple of the kids looked at me completely lost; they don't get to make choices about anything in their lives, let alone what they want to do in a group training session. So far nobody has said they want to do court sprints, and I'm fine with that! I feel the kids have surprised me thus and have made good use of this time. So although there is a set time for practice, they still have the freedom to practice anything they like.

For those interesting in the dynamics of my practice settings. Our Tuesday group trainings run for 1.5 hours and we have 2 groups back to back. Each group will have between 4-8 kids in it depending on the day. I will group the kids in pairs or 3's and let one of them pick first what they would like to work on and how they would like to work on it; a drill, condition game, ball machine, with a coach or with some feeding. If they know what they want to work on, but don't have an idea on what would be a good drill I'll give them a few suggestions and they will pick one of them or tweak it make it their own. Generally after 10 minutes I'll let the other kid pick what he or she would like to do. We will then switch up partners and go through this again for most of the practice.

So far I believe that the older kids have been a bit better at running their own drills and knowing exactly what they want to and need to work on. Some of the younger kids I feel don't like to practice what they have trouble with and prefer playing games. I must say I enjoy watching the older kids take charge of their own squash game and I'm excited to see how this develops.

I've only attempted this with high school students that have played squash for a minimum of 2 years so far. This is something I am considering to try with the middle school kids (11-14 years old), so I will need to post an update on this down the road. I know it goes against how we were brought up and how we think learning should take place, especially in a school setting, but I always enjoy trying new things and finding methods to improve practices.

In lessons I always ask the student what they would like to work on and it's finally time I began to do this in groups. I like this in the group setting because the kids can work on an area that they would like to, which is probably an entirely different area than the kids on the next court. With this method of training the kids will get more individualized practice and hopefully this will help their development and love of the game. I also feel like this gives the kids more creativity in their game and in how they want to practice.

When I was a kid I wanted to be the best in the world and practiced relentlessly. Many kids have dreams like this and I'm hoping that by relinquishing control of practice (at least for 1 day per week) that this may light some fireworks and for others rekindle their passion for squash. I know some of you must be wondering about that extra little push we need from time to time to become the greatest we can be and to make the most out of each practice? And what about the kids that don't really want to be there? Well if they don't want to practice they don't have to; I don't want people like that at my practices anyways. If someone needs a push I can still give it to them, but I can give it to them while they are designing and running their own practice. I'm now not the one telling them one to do and how long to do it for, but am their assistant; the athletes are in charge. I can want to produce a World Champion all I want, but in the end it isn't up to me and I wouldn't take credit for it. I may have come up with the idea for Training Autonomy Tuesdays (kudos to Daniel Pink!), but whatever level the kids achieve it will be because of their effort, passion, goals and dedication. 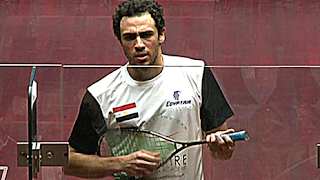 How much control is the right amount to give up as a coach? What about teachers? Can they give up any? Should we? Squash is a sport and kids play mostly because it's fun. Many of the top musicians and artists became the best because they wanted to practice, not because they had to practice. Even on the biggest stage Ramy (above) is in his natural element and enjoying himself; that's part of why we love watching him play. As soon as I start telling kids what to do and that they must practice x number of hours and days per week the fun can quickly disappear. When I start calling all the shots the kids are practicing so they can achieve the goals that I've set for them, which just doesn't seem right. If a kid wants to practice more and sets challenging goals I can let them know what it takes, but I want that to come from within, as it did with me as a young boy.