Footwork In The Front Forehand Corner

When I was young I was always told never to hit off my right leg in the front right corner. I still try and get kids to hit off their left leg here, but it;s not for the same reasons I was once told too. When I was young squash was taught very conventionally; basically always hit off your front foot. As the equipment (racquets are lighter) and the speed of the game has increased it's more important than ever to be able to hit off your back foot (open stance). So if this is true why do I still get kids to hit off their lead leg on their forehand? Well this helps to square up their hips and shoulders which will make it easier for them to hit a good straight drive. The forehand swing involves a lot of rotation so it is extremely difficult to hit an accurate straight line if your hips and shoulders are not parallel at the start of your swing. 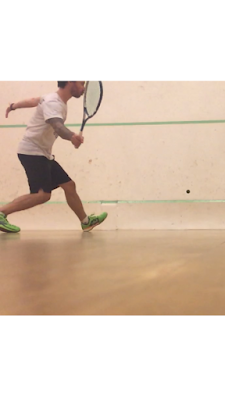 Another reason I get kids to hit off their front leg in the forehand front corner is because most of us want to hit all of our shots off of our dominate leg. Seeing how challenging it is to hit off your back leg/non-dominant leg on the backhand it's important to learn how to hit off this leg on the forehand side. I find these important teaching tools as I remember too how uncomfortable it felt trying to play shots anywhere on the court on my left left, especially from the front forehand corner. So what's changed?

If you're under pressure it's going to be quite challenging to move to the front forehand corner and play off your front leg. You may not have time to get beside the ball, so unlike when I was younger I do feel it is essential to be able to hit off both legs, not just in 1 area of the court, but all over. The challenge here is that if we are stepping forwards with our back leg and playing open stance from the front corner our hips and shoulders are now open which again makes hitting a great straight line extremely challenging.

When you're young and learning to play getting square and beside the ball at the front forehand corner will help you learn how to play off both legs and also hit the ball straighter, which is really important! But the problem here is that in this position it is also very hard to hit a good width from this setup and an experienced opponent will know this and be looking for your straight drive. So what do you do?

Believe it or not the solution is likely to go back to what you did when you first started squash with just some subtle differences! You will need to go back to opening up your hips and shoulders and play the ball further ahead than normal. If you hit it straight you will hit the ball just off your front foot with your racquet head square (parallel to the front wall) and if you're gong cross you will hit the ball slightly further in front of your foot with your racquet contacting the ball at an angle. I try and point my front shoe towards the front corner which means my hips and shoulders are no longer parallel to the sidewall. I do this regardless of which foot I'm hitting off of.

The 1 main difference in hitting with an angled approach is that amateurs won't have the proper amount of rotation in their hips. This is kind of tricky to explain, but basically most amateurs that step forwards with their back leg (like in my pic below) won't be able to square up their hips just enough (not completely square to the sidewall) and shoulders enough to hit a good straight drive. I like to think about where my belly button point is pointing. I can have the same stance, but my belly button can point in vastly different directions depending on the amount of rotation from my hips.

There are a number of advantages and only 1 disadvantage to approaching the ball at the front at an angle. The 1 disadvantage is that it is tougher to hit a good clean straight line. The advantages far outweigh the 1 disadvantage. First you can disguise your straight and crosscourt drives. It's so crucial to disguise your shots! Another advantage of this adjustment is that you stay closer to the T and hit the ball a bit earlier. Staying a bit closer to the T means that you have less area to cover to get back into position. However you do need to be able to lunge and be able to adapt your swing path to play straight from this type of stance. It will take some practice, but it can really help you disguise your intention and be more efficient with your movement. 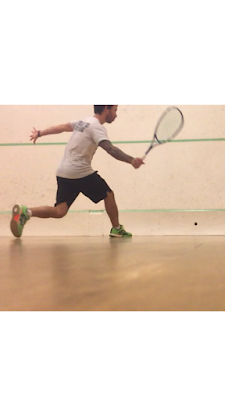 Remember to think about what your posture is telling your opponent. You can also try and square up to the sidewall and show a straight shot and hit a trickle boast or try and flick the ball crosscourt. The angle your body is at when you're starting your swing tells your opponent a lot about the direction you're intending to hit the ball. Although we use our body as a frame of reference for hitting the ball in a straight line, our opponents can also use it to anticipate our next shot.

Hopefully this gives you a bit of an insight into what can help you hit it tighter, but also on how you can disguise your shots. If the ball is tight to the sidewall or you're under a lot of pressure you shouldn't be worried about disguising your shot direction, simply execute the best possible shot to get out of pressure. Whereas if you're under lots of pressure you'l go in at the ball at a more sever angle and it will make it even more challenging to hit straight. You'll see some amazing swing manipulations by the pros to hit it straight when under lots of pressure and it seems no longer possible. The risk here is that the more pressure you're under the slower you will be to clear. If you try and hit straight when it's most difficult you could be at risk of a getting a stroke, but also of catching your opponent completely out of position. 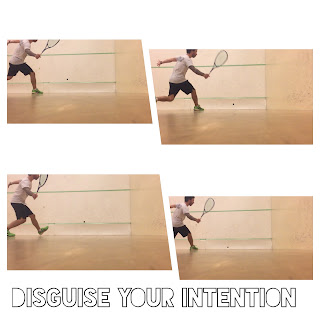 Learning how to hit the ball straight or cross from the same setup is a key to playing at a high level. I like to start off my match by playing a boast to the front forehand and checking what my opponent does. Usually people will just hit crosscourt from the front forehand corner if under just a bit of pressure and if you can see it coming by reading their body posture look to jump on it and volley it! This is a great combination you can add into your game. But beware if your opponent can disguise their shot well from the front and are on your boast quickly enough you may have to put this tactic in your back pocket for the time being.
Posted by Chris Hanebury at 12:01:00 AM