Lose The Battle, Win The War

It's easy to see when you're opponent is really having to work hard to get a ball back. Maybe they hit a short length and they don't have time to get to the T and you go ahead and play a drop as they are so far away that they have to sprawl out completely just to get a racquet on your shot or even better they can't reach it at all. Making someone do a diagonal and get the tour in a rally is also quite enjoyable and it's obvious to both players who is going to win if these type of rallies continue. As you get better in squash it's not always so obvious to the observer or even the players who is doing more work. Assuming both players are equally fast and fit and have similar skill level, the player who has to work just a bit harder will likely break first, either mentally, physically or both. We all have a limit where out shots start to lose accuracy because we're late to the ball and even later recovering to the T. When we get fatigued we tend to make more poor decisions and the mistakes can tally up in the blink of an eye. Today we're going to talk about how to get someone to this breaking point and to tally up quick and easy points once they do. 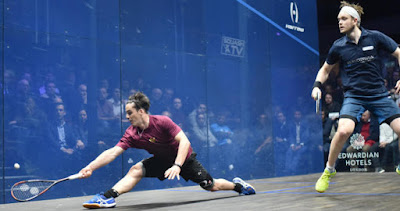 One way to break your opponent is to lengthen the rallies. Even if you are equally fit, if you move more efficiently the duration of the rallies shouldn't hurt you as much as your opponent. If you can hit great length and width and minimize your opponents attacking opportunities they will eventually wear down because they are less efficient moving around the court than you. This tactic can also be effective if you're playing someone that is carrying more mass around the court. If you lose the first game or two, but the rallies are long don't panic; stick to your guns and keep the rallies really long. Your opponent may just win the war, but you have a good chance at coming back and winning the battle if you make it tough enough for them. 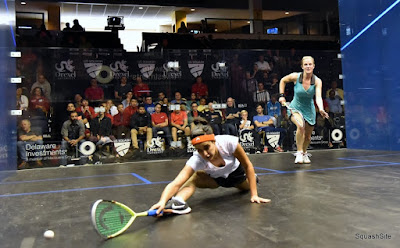 Another way to break your opponent is to increase the intensity of the rallies. Making the rallies harder does not necessarily mean that the points are any longer in duration. Learning how to make a good player work hard in a rally is tricky. At a high level we generally have to get our opponent out of position before attacking. If you can volley this is a good way to take time away from your opponent. Even a simple volley drive can be quite difficult on the legs and the lungs. This brings me to my next points. Think about which movements on the court are the most physically taxing on you. Are these the areas which are most demanding on your opponent as well? Perhaps it's a 2 wall gut wrenching attacking boast that makes you rush off the T and make a big stretch to the ball and then hustle equally as hard to get back to the T. Maybe it's having to rush to defend a perfect weighted length. Maybe it's going back into the same front corner twice in a row. All of these are certain shots which may not result in us winning the point out right, but can put quite a bit of work into our opponents legs, lugs and mind. 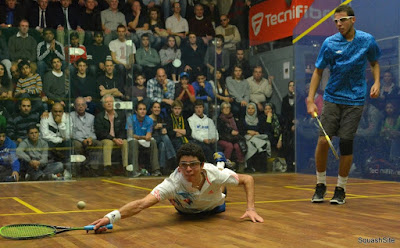 If you can make your opponent have to dig deep to stay in rallies, the outcome is really irrelevant. If you can find certain shots or combinations that are making your opponent play shots at a full stretch, at top speed, stop and change directions over and over you have a great chance of winning the match. This is tough to learn as a competitor and also to notice happening as an observer. I play a lot of holds and use deception a lot in my game and most people that don't see deception much get super tired quite quickly regardless of how fit they are. For someone like Paul Coll he uses his counter drops often and even plays them sometimes when his opponent is already high up on the T and expecting it. He's not always playing these drops as winning shots or even to set up a winning shot, he's simply trying to stretch out his opponent and make him do lots of work over and over again because he feels he is going to win the physicality battle when it's all said and done.

I've always said that it's important to make your opponent pay for going short from the back of the court. It's super hard work moving up there and getting back to the T so if at all possible I like thinking about counter attacking so they don't continue to employ this tactic. If your opponent is getting weak replies off a boast from the back they're going to keep going to the well. If you go up there and play a great counter drop or drive and put the pressure right back on them, well it may have been hard work for you to do so, but your opponent may think twice about playing that same boast again. So if you get beat on a short attacking ball from the back you have to look out for it again right away. If you were nowhere near the shot your opponent is going to think you were not watching, were flat footed, too far back on the T or perhaps you're just too slow or getting tired. Whatever the actual reason is, you have to be ready for it the next rally. Get back up on your toes, stay up on the T and watch your opponent closer. If they do go right back to this shot again get up up to it faster and make sure you do something with it, otherwise it's going to be a long and painful match (actually probably a very short match). So learning how to take away these openings which your opponents use to make you do the hardest movements are equally as important as learning to exploit them. 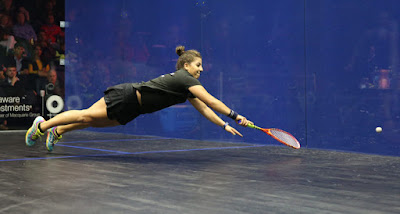 Another example of putting pressure and not going for the outright winning shot is playing volley drives off of your opponents length. When someone hits a ball that you can volley they are generally forced to run to the T faster and sometimes they get in front of you before you get to hit your volley. When this happens you should think about volleying it deep and make them have to back up and go dig it out again. This is such a tough movement if you hit a good volley and it can lead to another opportunity to volley. Many amateurs just see a ball they want to volley short and do it every single time and think that their drop just needs to be better. In this particular situation it's about how quickly their length was struck. If you can volley quickly, prior to your opponent getting up high on the T the short shot might be the best opening. If on the other hand the ball was not hit that fast and your opponent has time to get back up high on the T, you can assume a good player is up and covering the front of the court and now the open space to attack into is back deep again. This takes a lot of skill and practice to get to this level, but it's an important part of learning how to have some patience and to focus on making your opponent work hard so you can win the battle.

Attacking drives, boasts, counter drops, holds and volleys are all so critical to working your opponent. At the highest level these shots in themselves rarely win points outright, but they eventually lead to a mental or physical breaking point which leads to cheap errors or slower movement, weaker lunges and easier opportunities for you. Learning to take the ball early, use the whole court, move the ball around and make your opponent rush back to the T only to hit it back to where they just came from or even have to change directions are so tough on the body no matter how fit you are.

Don't always think about winning a point or get bothered by the result of each rally or even of a game or two. Focus on being efficient with your movement and making sure you can get out of trouble within 1 shot whenever possible and at the same time making your opponent twist and turn, stop and start, rush, lunge, reach, stretch out and scramble. There is nothing quite as enjoyable as the feeling of breaking a strong opponent and then reaping the rewards of easy points and certain victory. Which also leads to the point that if you and your opponent are both working equally hard with the same fitness and skill levels the difference is going to be between the ears. Mind over matter is what it comes down to. Oh how great is squash? The perfect mixture of skill, mental toughness, physical fitness and tactics.

Next time you get out on court think about what movements or shots give your body the most trouble and notice what shots give your opponent the most too. Just because they return the shot or even hit a great shot, they still did some work and eventually with enough chips of the hammer that will reveal itself. Just like the San Antonio Spurs sign in their dressing room reminds them reads, "When nothing seems to help, I go and look at a stonecutter hammering away at his rock perhaps a hundred times without as much as a crack showing in it. Yet at the hundred and first blow it will split in two, and I know it was not that blow that did it -- but all that had gone before."

Coming soon is the first full length Serious Squash film titled 'The Secrets Of Solo Hitting.' The video portion is almost complete and then it's the editing and audio portion. It will be available for purchase at SeriousSquashShop.com once completed. For now check out some of the clips from this project on the Serious Squash Instagram or Facebook page or on my youtube channel at cchsquashpro.
Posted by Chris Hanebury at 10:44:00 PM