When watching the finals of the Bellevue Squash Classic I did some charting. In the semis I charted one of Farag's games because I was surprised how rarely he plays straight drives. He does move unbelievable so clearly he doesn't want to get stuck into a controlled/patient style of play. I was curious if his lack of straight drives is why his technique on his drives is a little suspect. But this post isn't about technique, it's about shot selection and notation. 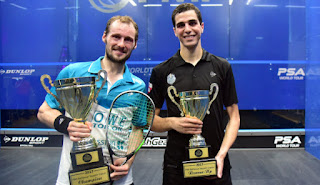 In the semis where Farag played Marwan Elshorbagy I only charted the first game. There were 115 shots in the first game and 42.6% of Farag's shots were straight drives. Also 10.4% of his shots were boasts, which seems very high for the first game at this level. 25.2% of his total shots were short so he was certainly trying to move his opponent around. In the finals I decided to chart Gauliter because I thought he played more structured and we would see this in the numbers. I think we know Gaultier crosscourts a lot from the forehand, but is generally quite patient. Here's how the numbers looked. 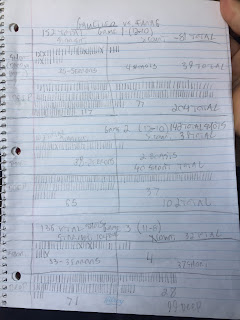 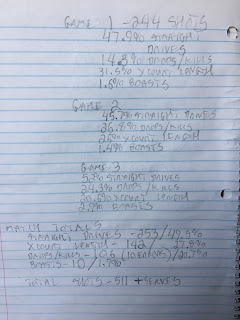 It would be interesting to see more stats like this against other players and be able to compare them from match to match and event to event. Would Gaultier play more or less short or more or less straight against a more traditional player? It would also be interesting to know how many shots per rally or game his best suit his game or give his opponents their best chance. The French General was pretty fortunate to win that 2nd game and it looked like he lost his focus and started going short at the wrong time. He also popped up a lot of his drops, which I can only assume has something to do with his ridiculously low string tension. It as nice to see him stay calm out there and both guys seemed to be really enjoying the match.

Do you think the shorter or longer rallies favour Gauliter? He did well slowing the pace down and lifting the ball and his movement really is outrageous. Still I think Farag was close and had a chance to win all 3 games. Do you think Gaultier should go short more or less? Should he play straighter on the forehand and cross or boast more from the backhand? He certainly gets stuck into patterns, but because he's such a great mover he can get away with this predictability. I'd really like to see a healthy and fit Ramy have at least 1 or 2 more good battle with Greg before they retire.

Have you ever charted your own match? What you think is happening may be quite a bit different from what actually is going on out there? Sometimes just a few more shots to 1 area of the court can change the game around. Maybe being slightly more patient, or just a little more aggressive is all you need to turn things around. When a pro plays 100-200 shots in a game a difference in 5-10% of shot selection is huge. This could have to do with settling into the match, gaining confidence, the players getting tired or the ball softening up.


Have you hear about The Secrets of Solo Hitting? It's a 64 minute instructional video which contains 30 solo drills which will help you improve your squash game. Pick up a copy at SeriousSquashShop.com/collections/coaching-videos and if you don't enjoy it I will give you a full refund. So far there are over 100 copies sold to people from all over the world. Here's a preview of the film
Posted by Chris Hanebury at 1:22:00 PM