One of the great things about squash is that compared to other sports it really can be played your entire life, but for many of us it isn't. In squash you can be competitive and play tournaments at age, from under 11 to 75+. Since finishing juniors or varsity squash we tend to see most squash players disappear from the competitive squash scene. Some will continue to play the odd regular game with someone at their local club while others will turn to the more social and easier on the body game of hardball doubles. Once I got into coaching I also failed to play as much competitively for a variety of reasons. I think a lot of this stems from people moving on to the next stage of their lives and today's post is about trying to keep people in the sport after their junior and college careers and in doing so increasing participation in squash tournaments. 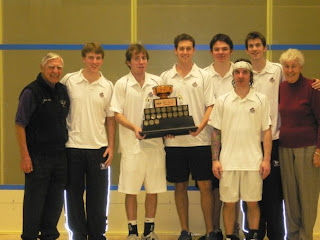 When you're a kid you don't have many responsibilities. Even at university squash practices are all scheduled for you. There's also a lot of perceived expectations and self-imposed pressure that can take its toll on you over the years. When we finally finish competing as a junior or varsity athlete we have to set up everything on our own and clearly many of us do not make the time or have the desire to organize our own daily training schedule. Our focus turns to more adult like things such as careers and making money. Early adult life is for getting our career and our love life in order so we push aside our hobbies such as squash. It can also be quite a relief to let go of all that pressure you felt to win during your junior and college days.

Besides the challenges already discussed above there is another issue I believe keeps people out of competitive squash after juniors and university. As an individual sport we have all worked vey hard to get to a certain level and to play at our highest level requires daily practice both on and off the court. If we are unable to prepare to play at our best many of us just won't enjoy stepping on court and playing well below our potential; none of us want to lose to some junior we know we're better than. After all squash does require an extremely high amount of physical fitness to be successful at a high level which is very challenging to maintain when a weekly training schedule isn't planned out for you. Is this starting to sound familiar? 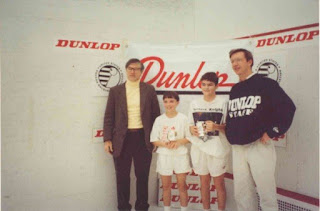 Long time rival and friend from juniors in the finals of the U.S. Open

From years of playing squash we have built up an ego about our skill level and who we believe to be better than or similar to. We like to preserve this level in our minds about what level we can play at with just a little bit of discipline and training. But even still at this years senior nationals (held in the squash capital of Canada, Toronto) the masters divisions of 30 and 35+ were very tiny. We don't have to worry about playing 2 matches in a day or losing to some kid because they're training every day and we're too busy living like adults. In the women's masters events they didn't even have entries in the lower age groups. It's kind of ironic that representatives of Participaction were on hand at the nationals when it's the one's who weren't in attendance that need that kick in the pants.

I know from growing up in Toronto and playing at university how many strong squash players there were and still are in the area, yet most didn't play in the nationals. Is it because they don't have the desire to play tournaments anymore or do they not think they're good or fit enough to enter? The age groups are much more about fun than the competitive open or junior events. I wonder why most didn't play when it's in their home town while I'm flying across the country to go compete.

I guess the main thing I take from all of this is that I wish more people would just get out and play and keep the squash spirit alive! It's easier to say than do, but if we don't worry about winning and losing and simply having fun and reconnect with old friends we battled against as juniors it could be a lot more fun than pain. If the nationals was held anywhere besides Toronto I'm sure the age group draws would have been even smaller.

I don't know what we can do to get more people to participate after juniors or varsity squash, but it would be great to keep more of these people stay in the game. Squash is a pretty small scale sport and it's a shame that so many skilled people who spent such a large portion of their youth playing squash stop competing and being a part of our sport. I know people begin to have families and get busy with their careers, but I know I would really miss squash if I just stopped playing and being around the game.

Do we need to find a way to make squash less competitive or less physically taxing for those that aren't playing much, but were once strong players? What if we played to 7 PAR or best of 3? Or simply guaranteeing just the 1 match per day? I'd actually really like to see the low tin used on all courts for amateurs so this could be a good step too. Or perhaps the best way to keep all of these people involved at tournaments is to provide lots of free beverage tickets ;)

Squash Canada and each province needs to find a way to keep all of these previous juniors involved in squash at any capacity. I know there is a big gap right now for people that want to go from juniors or varsity squash to the pro level. Maybe it's just up to each and every one of us to just sign up as long as we are relatively injury free. Nobody is ever completely healthy and fit when they get into their 30's and this is why they have age groups! I know it's too easy to listen to the reasons why you shouldn't, but remember life is about experiences and getting outside of your comfort zone. Hopefully this trend will change and we'll see more people getting back into the competitive side of the game. Remember that you don't need to be playing the best squash of your life to play in a tournament. There is more pressure to prepare for competitions when you're a kid, but this is only self-imposed when you're older. Sign up and play and don't take yourself so seriously. Let go of expectations and your ego and you may just find yourself enjoying the best game in the world with an old peer.

Play squash because it's fun and because you love it. If you're worried about the outcome you have to remember it's just for fun and exercise. Let's help keep the game strong with increasing participation which likely also will increase the tournaments beer sales too! Support your local club tournaments and play provincials or nationals whenever possible and especially if they're close to your hometown. This post doesn't just have to do with Canada or Nationals, but any club in the world. How many times have you made illegitimate excuses not to participate in a tournament because you didn't feel 100% prepared for it? Let's all try and say 'sign me up' a little bit more. Let's try and remember that the game is bigger than any single one of us.

I leave for vacation tomorrow so there will be a break from postings. I'm certain I'll come up with some new great topics to write about once I return so stay tuned for those. This summer I also plan on beginning to film the 2nd Serious Squash instructional film. Stay tuned for more details. If you haven't hear yet, the 1st film is a full length instructional video titled 'The Secrets Of Solo Hitting.' It contains 30 solo drills and tips to improve your game. The film can be streamed and downloaded at SeriousSquashShop.com/collections/coaching-videos and there is a no questions asked money back guarantee that comes with it. Here's a video preview of the film: