Where And When To Shoot

I recently worked with a student on her shooting. She's a young junior and has great hands, but at times would shoot from anywhere at anytime. I have no problem with people making mistakes in their progress of becoming great squash players, in fact it's absolutely necessary. I grew up as a very attacking player and lacked discipline so I know there is an optimal balance in here somewhere it's just about understanding it that is so tricky. As I've gotten older and played at a higher level I have a deeper understanding of the pros, cons and risks of shooting and playing aggressive squash. Squash is definitely becoming more and more attacking so I normally promote this and let players choose which style of play they want to play. I might prod with a few questions if I sense poor selections are a reoccurring theme, but I also enjoy seeing people taking the initiative and making things happen on court.

What I did with this junior was I had her draw up a diagram of when she should, shouldn't shoot and where it might be ok to shoot. Below is a version that I did on the 'maybe area to shoot from' which I chose as the back of the court. We are taught to focus on hitting length from the back of the court and to get our opponent behind us before applying pressure from the midcourt area, but as our skill set improves we can take the ball in short from the back if the time is right. I thought about the different scores in a match where shooting from the back is ok and when it is not; area like when I'm having a lapse of focus, I'm tired, lacking confidence, angry or other specific scenarios I know the odds are against me while in other more positive situations I can attacking with a higher degree of success. I first started with a basic list of 3 categories titled 'Shoot', 'Don't Shoot' and 'Maybe Shoot' before moving onto the following diagram. 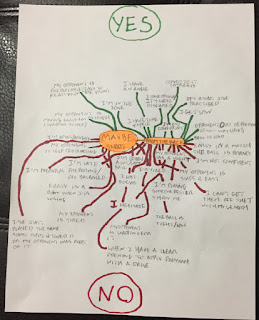 Squash can be pretty dull to play and watch if we are too patient and the rallies drag on without the use of the full court and moving our opponents around. This weekend I've been watching some of the Men's College Team Championships live feed and I noticed how much the general tactics have evolved, some for the better some not. In my last year of playing varsity squash we were still playing to 9 where you had to serve to win a point. Now everyone can bring the ball in short half decently and thinks they can hit nicks in a pressure situation. Greenly the kids are faster too and can often make up for their poor shot selections, that is until they come up against a real top class player.

When I was playing at university most kids were very patient, basic and fit. Now it looked like most kids were using the front of the court for a third or more of their shots and quite often at the wrong times. I saw kids going for nicks when they were behind their opponents and fatigued at the end of a long gruelling rally, off return of serves when they were down gameball and I saw many losing their focus and basic structure in their games. I also felt like their basic length was not very accurate, which is understandable if they don't play it all that often. That being said, I did also notice some kids who just can't apply pressure against fast opponents. So finding the balance between structure and playing aggressively is a real key point for me when I'm watching people play, coaching or when I'm competing as well.

I don't like telling someone not to play certain shots, because I like people to think for themselves and to be creative and engaged in their match, but there are clearly ways we can all be smarter about where and when we use the front of the court. Do you go short when you're off balanced, tired, under pressure, upset or simply because you think you can make the shot event though it isn't the best option? Your opponent's skill set pays a big part in when to use the front too. Do they hang too far back on the T or are they super quick? Is the ball really hot and bouncy? The amount you 'shoot' or use the front of the court will also vary as the match go on. As people fatigue and the ball slows down there will be more openings to use the front of the court, so just because you're an attacking playing it doesn't mean you have to come out guns blazing form the first point. It also doesn't mean you have to hit 33 nicks to win a match.

After watching these college matches I thought shooting would be a helpful topic for all of us. Find the balance and learn where and when you want to go for your shots. And if you want to improve your short game work on it all the time. The Secrets Of Solo Hitting has 10 of the best solo drills for working on your short game and Mastering Deception will teach you some great drills to improve your shot selection, anticipation, disguise and deception. Both films come with a money back guarantee. Pick up your copy today at SeriousSquashShop.com/collections/coaching-videos

Check out Serious Squash on Youtube, Facebook and Instagram for the most regular posts. Also, be on the look out for some new items coming to the Serious Squash Shop!