When people first start learning to ski they are taught how to fall so they are not scared of this happening and injuring themselves. When I thought about this I started comparing it to squash and learning how to fail, or lose. See for some reasons we've come to think of losing a competition as a form of failure. Almost all of us have stepped out on the court often and played trying to lose than playing to win. We worry abut who we are playing and what the result should be. It's no wonder we normally play our best squash when we are up against a stronger opponent where we don't have any pressure and they do. 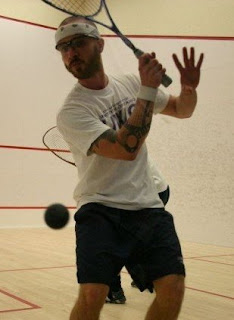 I know a loss in a big tournament has bugged me for a year or more. I now try and give a short window(5 minutes) after to learn from the match and then completely move on. Unless you've filmed the match or are going to discuss it later with your coach it's best to let a loss or win go as soon as possible.

A squash match isn't like a test in school or any other test for that matter. If you prepare properly you generally know you are going to be successful, but in a squash match only 1 player is going to be the winner on that given day. Failure isn't something anyone enjoys and generally makes us want to train harder so we can succeed next time. But once again this doesn't mean that success is a given. If you prepare to the best of your ability I believe it can take off a lot of pressure and improve your confidence heading into a match, which are both very important to improving your likely of being successful, but it doesn't guarantee success. In fact, nothing guarantees success in sport, that's why we play the game.

One of the hardest things to teach a kid is to give everything they have to try and win, and even a little bit more, but that it is still okay if they do not. This is why as coaches we talk about process goals so often. When we set goals based solely on outcomes they are in many ways out of our control. This again makes me wonder if it's possible to redefine success from your matches so that you are always successful? Obviously if we break success down into some controllable categories it can be. I like to focus on the preparation leading up to the event/match, the effort and competitive level and if the athlete was able to experience the zone. Experiencing flow show a level of focus and being able to calm ones nerves, shake off bad moments which is essential to playing at a high consistent level of squash.

We could also talk about tactics, but nobody gets tactics completely right all the time. But if we focus on playing the right shot we will help our long term development most. Many people think that playing the shot that they are most comfortable with and will mess up less is smartest, especially in the big points, but this is also going to limit your growth and development in the long run. If you continue messing up on the right shot over and over in a match, at some point you need to put it on the back burner and work on it more in practice, but to never play the shots you're working on until they're perfected shows you are again focusing solely on the result and not the better picture. So when we look at measuring success on this level, someone could win a match, but not be successful. It's really all a matter of how we define success.

We care about winning and losing. We care about our ranking and doing our best, but these are all factors that will take of themselves if you focus on the things within your control. It's extremely difficult to let go of the fear of losing or being defined by your level of accomplishments, but it can also free you up to play better squash, with less pressure and ensure that you will enjoy playing for a longer span of time because it's more about the journey of becoming the best you can possibly be than it is about focusing on only winning each match you play. This means you won't be one of those old men are your club who still throws a temper tantrum in the C consolation draw. So yes, basically try your very hardest to win each and every time you step out on court, but don't focus on winning or let the outcome define if you were successful :)

There's some new Serious Squash products coming to the store soon. There will be a very limited number of custom designed yoga mats an another new product coming out in a couple of months. There are still lots of tees and 2 instructional films for sale. Check it all out at SeriousSquashShop.com
Posted by Chris Hanebury at 12:30:00 PM