Well I just finished the Canadian Senior Nationals and finished 2nd in the 35+ division, again. It was pretty sweet this year that they brought in a glass court for the event. It's too rare that anyone get to play on a 4 wall glass court now that the NSA has shut down. Although having this court was great (and you can see below that it looked awesome) it takes some time to adjust to it and was not all it was cracked up to be. Imagine a tennis player going to the French Open having only have ever played on hardcourts? And further yet and was unable to even hit on the courts prior to the tournament? 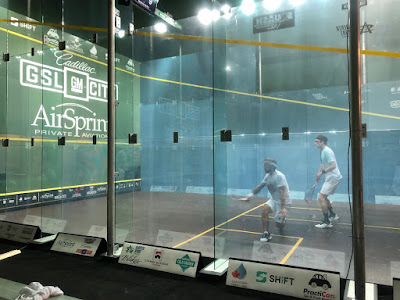 Not all squash courts are created equal!

The tournament started with the open event qualifying matches on Tuesday which were played on the traditional panel courts and in Calgary there's an altitude factor so the ball is noticeably quicker and more difficult to put away. Not too long ago they used to use a green dot in Calgary, which was called the altitude ball. I guess these balls didn't bounce true so they aren't used anymore. This tactically and physically really changes the matches and is a big reason why Calgarians seem to always fair well when they play at home and don't do quite as well when they play at sea level. And for the record, yes the person that beat me in the finals was from Calgary. His game clearly suited the elements better than mine. But this post is not about my squash, nor is it too complain for losing my match. The masters events are just for fun for me, but my experience of playing some matches on the regular courts and the finals on the glass court give me a unique perspective for the open events.

One big problem with putting up a temporary show court is that it takes a lot of time to plan and set up. The court was not put together until Tuesday night and the open matches were starting at 10am on Wednesday. Some of the pros I know requested to get practice time on the glass court in the morning before their matches and were unable to. There were only 4 or 5 time lots and they were full. This meant that this small select group of athletes got to practice on the glass court while their opponents did not. You could see the result of this in the quality of the first round matches. At altitude on a glass court, with large white sponsors writing on the front wall made it very difficult to pick up the ball and volley. There were also lots of crazy, lucky bounces in the back corners. I've never seen so many top players aced in my life!

I like to think I have pretty good racquet skill and it was pretty frustrating to not be able to control the ball like Im accustomed to and feeling like the only style that was effective was to try and bash the ball and hit everything deep which also happened to be my opponents style of play. So basically my only shot of wining is to outplay my opponent at his own game; I don't like my odds and I too would have needed some practice time on the court if I was going to have a shot at wining. But if the pros can't get on to practice I know I have absolutely no chance of doing so. I can only imagine for pro players that are training full time how frustrating this must be to feel kind of incompetent. The better player should win and I don't think this was always true. The player who suited this style of play won. The style that suited the glass at altitude was fast and low drives. You could get away with more crosccourts than normal because it was very tough to see the ball early enough to volley.

I know that a club only hosts nationals every so often, but I thought it was completely unfair to allow only some of the pro players to practice on the glass. Either all or none of them should have been allowed practice time. When I walked into the glass court to warmup for my finals I was worried when I could barely see my first volley drive I hit. It took almost 2 full games to adapt to the court and by then it was too late. I think my game fits a glass court as I have deception, volley a lot and have a good attacking game. For the masters finals they rated the tin on the glass too which made it even harder to use the front of the court. At least for the pros they got to use the 17" tin. But I thought only the top few players seemed comfortable on the court and I heard many complaining. I played on this same court 6 years ago, but at seas level and with a low tin and without the white logos on the front wall and I don't remember having any trouble seeing the ball or using the front of the court. This time was much difference.

At altitude I think they should lower the tin to 15" to make the game more like a proper squash game. In squash you should get rewarded for creating an opening and taking the ball in short well, but with the bounce of the ball (and on the glass court the difficulty of seeing the ball), most of the time players were punished for going short if it wasn't absolutely spot on. Since it was tough to track the ball and it was moving quicker than normal most peoples short games were definitely far from spot on and confidence is such a hug factor for people short game, so once they miss a few or hit a couple of lollipops they tend to become tentative.

It's true both players have to deal with the conditions, but I still like the way squashes become more attacking and fun to watch. If you saw any of the live stream you'll know that this wasn't Canada's best version of squash nor is it the style being played at the pro level. I think all tins should actually be lowered even for recreational players and in time I'm sure that will happen. When you change the elements like the altitude and court it certainly evens the playing field and gives certain players an edge. Is all this complaining based on my biased result or a true fact from the event? Oh and I haven't even mentioned how silly it was having to wear all whites in the Glencoe too! I got away with my off-white Serious Squash tees so I'm happy I didn't have to go clothes shopping for sports gear. I know there was a guy who played 7 matches all in the same shirt and pair of shorts! lol

For all of my complaining it was a fun week and a well run event. I lost to a nice guy who played better than me on the day. It's hard to win when you can't hit a tight drive to save your life. If the glass court practice times were sorted out better I wouldn't have much to complain about besides not being able to adapt well enough to the conditions. Next year nationals is in Toronto so we'll see how many Calgary players repeat their title defence and how the style of squash changes. If they bring in a glass court let's hope they sort out practice times and avoid large white logos on the front wall. Oh and by the way I won a buckle and a medal, yes that's right a buckle for a belt :/ I really don't like complaining and making excuses, but I suppose that's exactly what I've done..

Here's a link to the draws if you want to se all the results: http://squashcanada.tournamentsoftware.com/sport/draws.aspx?id=D1BF2F57-1EB0-4183-A2A0-8CAB9AE232C2 If you want to see my match from the final you can check it out. Go to the 1:24 mark https://www.youtube.com/watch?v=sksdpBIlNg0