The Tenaciousness Of Miguel Rodriguez

At the Canadian Junior Nationals recently I was talking with another about the future of Canadian squash. He said he wanted the Canadian flag to represent a specific trait at international competitions just like Egypt, England and France does. Canada is such a large, spread out country and quite diverse in ethnicity and the style of squash we play and our taught. My comment was that we had to be know for giving it absolutely everything we have. Not all of our national team members are going to have the shots and fluidity of the Egyptians or move as powerful as the French do, but we can always, and I believe must be willing to outwork our opponent.

See effort and sheer tenaciousness is something that I believe Canadians would stand behind and something that is needed to be successful at the highest level in squash. This is the exact trait I would say that Rodrigues displays each and every time he steps on court. Rodriguez also hails from a country which lacks depth of professional squash players, yet he has managed to find his way right to the very top of the heap and it was his passion and effort that brought him to where he is this day and allowed him to capture his first British Open championship.

When I watched the final of the men's British Open this past weekend I couldn't help but admire Rodriguez's tenaciousness. He dived at least 9 or 10 times and not once in the entire match did he ever give up on a ball, or appear down on himself. This is why he's always a crowd favourite and so fun to watch. You think all pro squash players would have these attributes, but it's not true. When many players get way down in a game or a match, the often believe that they are too far out of position or behind on the scoreboard. When this happens they will go down without too much of a fight because they either have lost hope or are being sensible and saving energy and focus for later in the match (or if the match is almost they may have given up belief that they could come back so why continue to give it all). I don't believe you can turn on and off your ability to be tenacious when it's most critical and when you have the highest odds of winning a point or match.

Rodriguez, as per usual didn't give an inch the entire final and that might have been the difference when they got to the end of the 5th game. When a game or match is only decided by a point or two and your opponent is being worn down, that extra effort you made to stay in a rally might just be what makes the difference and when it happens on the grandest of stages it shows us all just how important this vital quality is to winning squash at the highest level. 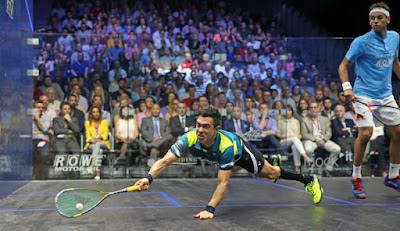 Sure Rodriguez has excellent ball control and has become smarter with his shot selection over the years and these traits no doubt helped him win this prestigious title, but I felt it was deserved because he absolutely never gives up, ever, ever, ever! That doesn't mean he's the best player, or doesn't lose, but it does always make him a pest and an extremely tough defeat. As a coach this is what we always look for most and admire in our students. There are many highly technically skilled players who have never had such great success as Rodriguez and I think that's why we all were cheering for him to pull it off on Sunday.


Also being one of the smaller guys on tour it's motivating for all the kids (and adults too!) out there who are shorter than their peers. It shows that heart really can be more of a weapon than skill, genes or any other trait which we don't always have control over. ElShorbagy gave a tremendous effort too and appeared to be running on fumes for half of the match so I feel like it's appropriate to commend him on his effort. But he's #1 in the world and has won so many titles and he's also a big strong guy, so I was very happy to see the underdog, Rodriguez capture his first World Series Title and such a historic one at that.


Over the past few years we've had very few shocking champions in the mens' game besides when Ashour disappears with injuries and comes back months later to win a title. But we know that the major events are mostly contested and won by the guys at the top of the ranks. When Rosner won the Tournament of Champions we were all shocked, but he is still a top ranked guy and has pushed and defeated most of the top guys at some point in time. Rodriguez was unseeded and although he was ranked as high as #4 a couple of years ago, he had a super tough draw including Ashour in the first round and Farag in the quarters. I don't know what his career records were against those two, but I imagine they were not too good. So it was really great to see him and Kandra both have phenomenal and unexpected results. I love watching the best players play, but I also don't want the head to head results to always be the same.

This is why they play the game; because anything can happen if you give it a shot, give it your all and have faith in your ability. It doesn't mean you are going to win every time you step out on court, but you will give yourself your best shot, regardless of where you're from, your stature, your draw and your previous results against certain players. If there's one thing I'd like to point out to the kids I work with from Rodriguez it's definitely the tenaciousness and passion he has for the game. Goliath doesn't always win, even when he's won countless times before so step into the ring swinging and play to win. And finally, remember that being fancies is a trait that we can all possess, it's a mindset and something that you have to look at yourself hard in the mirror and ask yourself the hard questions. If you don't know if you posses it just ask some of your opponents, they most definitely will know.