I thought this week it would be prevalent to talk about more than 1 subject. The first item on the agenda which will provide the majority of today's discussion is the lack of women in squash. March 8th was international women's day and it got me thinking a lot about why more young girls and women don't play squash. When I was young I confess I wasn't sure why we would celebrate a day for women, but never for men. When I was a kid there weren't any noticeable differences to how girls were treated versus us boys. As I got older I began to understand that women weren't always treated equal. A lot has changed, but it's clear that there's still a long ways to go.

Let's steer this back specifically towards girls and women in squash. Since I was young there has always been a lack of girls playing squash. That being said my home club had a woman as a coach and she helped me a lot. As this time I would estimate about 80% of all tournament participants and club members were guys. Does squash simply cater more to the the male demographic? Are women uncomfortable playing squash in front of a mostly male environment? I imagine some do, so as a coach it's critical that we do our best to create a welcoming and safe atmosphere for everyone. When I was young there were a number of all male clubs in Toronto. I'm not sure how many still exist to this day, but I believe there is 1 or 2. 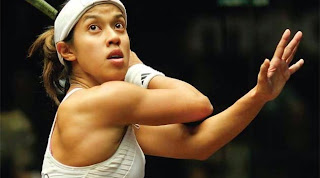 As a coach I've always ran a lot of events for women. In my first year coaching with the legendary Rob Brooks I learned a lot because he would annually host an all female tournament and a weekly women's drop in. The numbers weren't as large as the other events, but I could tell these were always very important to Rob and to the female members. After I graduated university and I got my first head coaching position I followed in Rob's footsteps and ran a ladies Christmas tournament and I also offered a weekly ladies only clinic. The numbers again weren't huge, but I felt it was important to offer events and clinics that women could feel comfortable and have fun in. 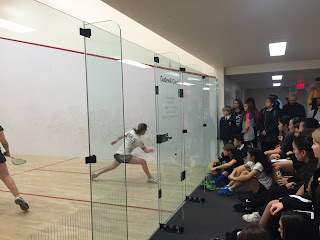 When I moved to western Canada and began coaching at St. Michaels there was I believe 2 girls on our team. Eventually we got to the point where we had as many as 6 or 7 girls traveling and competing in tournaments. This was a large number compared to other clubs, but considering we had over 30 kids on our team this was still a small ratio compared to the boys.

I saw the draws for the recently completed British Columbia Junior Provincials and there were only 33 girls in the event compared to 88 boys. There was no girls under 19 and only 3 played in the girls under 13 division. There are some amazingly strong girls in BC, but the numbers are as disappointing as ever and surely there is more we can do to improve this. 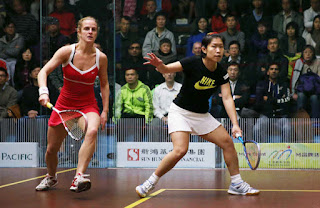 When International Women's Day happened on March 8th, I saw lots of squash players and organizations make posts to celebrate on social media. It got me thinking about why women's participation is still an issue. I realize some countries still don't have as many young girls competing in sport as they do boys. There is no professional NHL or MLB for women. PSA Squash is doing a great thing showcasing their women and offering equal prize money in many of their events. Still we don't see a lot of girls and women playing squash. Will that change over time as this equal prize money is still a moderately fresh concept? If the WNBA was on sport highlights and the players paid as much as the NBA stars would more young girls play basketball? It's tough to say how much this would change things, but I'm sure it would help a lot. 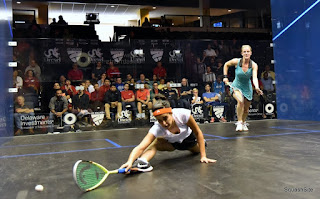 As someone who has coached a lot of young kids I can say that in general girls are more coachable, care more about the social aspect of sport, but boys are usually more competitive. Seeing that squash isn't normally a team sport perhaps that is why more young girls don't play?? I also believe part of it is because girls have to practice with some boys who they find immature and annoying! Whatever the case it would be great to see more girls get into our terrific sport and play competitively. I recall many times at my club back in Victoria we would never get women signing up for tournaments. 95% of them just didn't enjoy tournaments and only wanted to play their friends or take lessons. 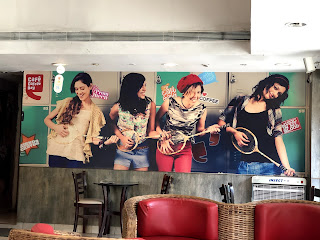 Anyways, on to the next topic. I don't want to be jumping on the media crazed band wagon about the coronavirus, but seeing all of these daily emails I'm receiving and hearing about all of the sport cancellations it's hard not to mention it. Just yesterday US Squash announced that they are cancelling all of their remainder national squash championships for the season. As of now in Canada they have not taken such a drastic measure, but things could change.

On one hand it's hard to stop living your life because of this, but on another you understand that organizations are all about risk management and they don't want to get sued if a large breakout takes place at one of their events. When on court the sidewalls are generally covered in players dried up sweat so maybe changing your preserve routine is a good idea, but besides this I hope the events in Canada don't get cancelled. 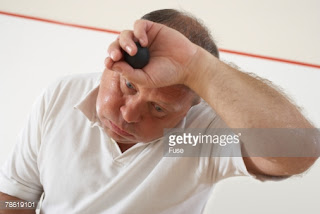 In the NHL I hear the San Jose Sharks might be forced to play in an empty arena in their next home game on March 19th. This is something that could begin to flush through the league and extend to other sports. If the MLB has to play with nobody in the stadium that isn't going to be good for business and most noticeably the owners. Even if the coronavirus was more deadly and widely spread it's hard to imagine a large corporation being okay with taking on and accepting such financial pandemonium unless they were forced to.

This might not compare exactly, but I've traveled to areas in the world where some mosquitos have malaria. There is always some risk in life, even just in travelling to somewhere and I'm not one to hide for the fear of something going wrong. I think if people are sensible and stay home when they're sick and everyone else just washes their hands we can and should go on living life just the same. Maybe I'll delay my trip to China for a the time being, but other than that life goes on. Here in Turks and Caicos tourism is almost the entire economy and if people decide they don't want to travel anymore that's not going to be good for the country and could lead to a lot of other bigger problems.

I'm not a doctor and I don't have all of the facts, but I thought it was worth mentioning because it is all you see nowadays and it is starting to have a major impact on sport. Coronavirus has already impacted all of our lives and for some reason more than anything I can recall in my lifetime. It almost  feels like we're at the beginning of a zombie apocalypse. Let's hope the worst is behind us and we can get back to competing and cheering on at our favourite amateur and professional sporting events.

That's it for this week. If you haven't heard there is a new Serious Squash instructional film available in the shop for just $5. It's titled 'Advanced Back Corner Solo Drills.' It contains 4 episodes of Squash Shots, including an episode on my 10 favourite core exercises. It's available to stream at https://serioussquashshop.com/collections/coaching-videos/products/advanced-back-corner-solo-drills

If you like the film and you'd like to subscribe to Squash Shots you can do so for as little as $3/month. Next week is episode 44 which contains 2 of my new back corner advanced solo drills. Learn more at Patreon.com/SeriousSquash