The Next Chapter: Back To London

It's funny how life works. Eleven years ago I couldn't wait to graduate university and get on with my coaching career. I had a 4 fun years at Western University where I played on the squash team and completed a degree in kinesiology ('09). Most of my best friends from my school days were on the squash team and we did everything together. Still, after 4 years of not making any money and training and studying year round I was eager to move on to the next chapter.

Now eleven years later I'm back in London hired by the club I was a member of back in my Western days, The London Squash and Fitness Club. The club is vastly improved from when I was a member. They've had a major club renovation since that time and it looks amazing. They still have many of the same members so I already know a lot of the people at the club. I've probably already received over 50 messages and emails from the members congratulating and welcoming me into the club. My brother also plays here so that's a bonus. It will be nice to have someone to film some episodes of Squash Shots with and to have my doubles partner close-by. 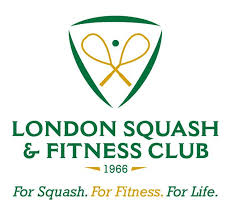 It wasn't an easy decision to leave Turks and Caicos. The weather and the beaches were terrific, but in the end it was not possible to make a living there as a squash coach. I did get the junior program up to over 20 kids, but without a base salary life just wasn't affordable. I was running an Airbnb for awhile, but Coronavirus foiled those plans. 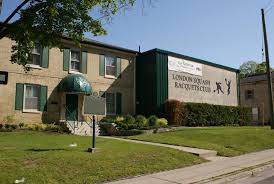 (The front view of the London Squash and Fitness Club)

So here I am back in London, in the snowy winter belt of Southwestern Ontario. The club is closed for now, so I'm still waiting for this pandemic to dissipate before I can get to work. I have started working on some ideas for the programming for next season. I'm hoping to make a big splash with the junior program. I'm also intending to run some group classes, which I don't think they've had many of in recent years.

London Squash is also home to the Nash Cup which I even played in back in my Western days! It was my only PSA I ever played and I made out of qualification to lose to the second seed in a relatively competitive match. The Nash Cup has had many top players and has both a men's and women's event. They always have a top Western player in the draw along with many of the top Canadian PSA players. They have live scoring and streaming. Here's the website so you can bookmark it for future reference: https://www.nashcup.com 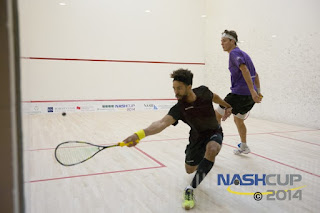 What am I working on at the moment? My days have basically revolved around workouts, filming episodes for Squash Shots, writing blog posts and now brainstorming for programming once the club opens back up. Yesterday I recorded a welcome video for the club which included 6 basic home exercises that the members that require no equipment. Here's the video if you're interested and yes, there were some flurries during production!!

Until Covid-19 disappears life will be pretty relaxed, but once things ramp up I'm going to get quite busy. Right now I can't help but wonder how squash will change next season. Will I be able to run tournaments? If I do will people participate in them like they did before? What about leagues and so on? How will clubs transition back to being open again? Only time will tell, but I do think it's going to take quite awhile for things to get back to how they were before.

If you want to know more about my new club you can do so here: www.lsrc.ca They have 4 singles courts, a hardball doubles court, a sauna in both change rooms, a pro shop and a bar/lounge. It's really a beautiful spot.

There's also an online shop if you want to purchase an instructional film, a video analysis or a signature Serious Squash Harrow racquet: SeriousSquashShop.com

Until next week stay safe, stay healthy and stay (or get) fit!