Today I was once again thinking about my trip to Asia and the Penang Junior Open. I've already discussed some differences in how the kids are raised and the style of play. Anyone who's been to a busy city in Asia and seen the aggressive drivers and scooters know what I'm talking about. This goes well beyond the squash court.

This will be a little receptive for some of you, but I feel is an important point. In North America generally children are babied and coddled too much. We are always worried about people getting sick or injured. We try and do everything within reason to prevent these unnecessary situations from arising. But the real issue is when is too much? How often do we actually live our lives instead of just get comfortable simply being alive? There is a difference between the two. In some of the countries I visited kids are working at their parents shops and driving scooters around without helmets, swerving in between gridlocked cars. Avoiding dangerous situations seems smart to us, but it can also make us avoid living and enjoying our lives. We think too far ahead to a potential consequence and in turn avoid the action altogether.

Let's get back to squash. You may be wondering how coddling our children and protecting them from the dangers of the world influences their squash game. I have a couple of beliefs about this. The first one is about the style of play. As coaches here in North America we hate seeing unforced errors. Keep the ball in play; hit it deep; wait for mistakes. Just like how we drive here. We're very careful and yes, we probably have fewer accidents (just guessing), but that doesn't make us become better drives, does it? I witnessed some amazing driving overseas. Certain curves and maneuvers I would never dream to try. And yet these people do it all the time and have gotten good at it. I believe the same can go with attacking and learning to attack from all over the court. I know length sets everything up, but this is definitely something that got me thinking about how we play vs. what I saw some of the other kids play like. 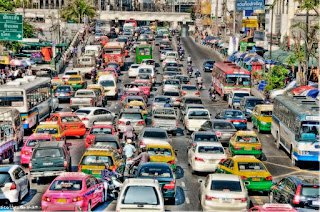 My second point here is about the psychological aspect of our societies. Here in Canada the pedestrians have the right away, cars let other cars in and so forth. That just isn't the same in Penang or Bangkok. You have to be focused and be smart about crossing a busy street. Over here people are picky and are generally unhappy with their jobs, but in many situations I witnessed people were just happy to have a job and worked very long hours. They don't finish at 5pm and get weekends off, their work was their life. I'm sure it wasn't that long ago that things were like that here in Canada, and of course there are still some places and people that fall outside of this middle-class territory and struggle each and every day. So you're probably asking again, how does this relate to squash?

I feel that people from tougher upbringings generally are used to working harder and can more adapt at handling unpleasant conditions (such as fatigue). Squash generally isn't a low income sport, but that is changing slightly with the creation of the Urban Squash Programs around North America over the past 10-15 years. But in some countries this is the way of life for a lot of people. I don't feel this applies to everyone, but I do think most people from cushiony upbringing don't like to get their hands dirty. And if you want to become a top player in squash you have to be incredibly determined and will have to overcome a number of physical and psychological barriers; so yes, you will have to get your hands very dirty to become a professional squash player.

I should also mention that I read in a book recently about how Kenyan runners walked 5 or 10 miles (can't remember the exact number) each way to school and this was a major factor to why they were gifted runners. How many kids do that these days?

So odds are most of my readers are feeling bummed out now. I doubt I have my followers from low income countries or families. So the big question is what can you do to change this? Here a few ideas.

- travel and see for yourself
- anyone can gain mental muscle. step back and give an honest opinion on your lifestyle.
- walk more, drive less
- play attacking squash and make make more errors http://www.serioussquash.com/2015/05/improve-your-game-by-making-more.html
- hard yards in the gym or the track. not only does this strengthen your body, but your mind. when the going gets tough on the squash court you have to be comfortable with your body feeling uncomfortable (and learn how to deal with those negative self-destructive thoughts) 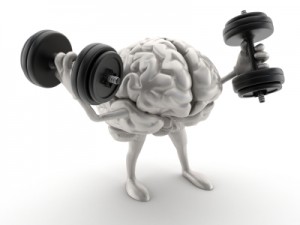 When I was in Thailand I was driven around on a scooter a few times without a helmet. It was pretty scary at first. I obviously can't suggest people do this or anything dangerous. If you have the option to use a helmet of course I would highly recommend it. This is more food for thought. 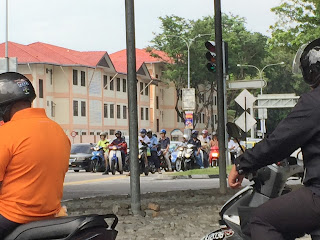 If you want to play professional squash you are going to have to not care about money so much. But this is a planned topic for a future post titled, 'So You Want To Go Pro.' I see less emotion from Canadian squash players then I did overseas. Do they want to win more, or are we afraid of expressing ourselves because of what others may think? If anyone has read Jonah Barrington's book, Murder In The Squash Court you will know he gave up being the chair of some committee because he felt he had to behave a certain way that was detrimental to his development.

A similar thing is discussed in a current book I'm reading called, 'David and Goliath: Underdogs, Misfits, and the Art of Battling Giants' by Malcolm Gladwell (pictured below). Gladwell claims that kids who lost at least 1 parent when they were young held a large portion of head political jobs in the U.S. and the U.K. throughout the course of history, but that also a higher than average degree of these children end up in prison. A kid can go either way; the death of a parent can motivate you and lead to greatness or you can struggle and never move on. Gladwell asks who would wish this upon a child, knowing this could improve their chance of becoming more successful? The answer is obvious, but it gets you thinking. It's an interesting read. 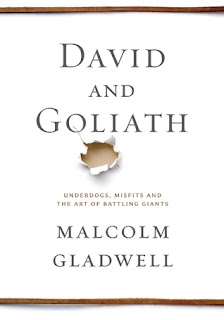 That's it for today. I hope this has got you thinning a bit about how you live and how you play squash.  I think it's important to think for yourself and not just do what everyone else does just to fit in. Watch good players and learn from each of them. If you're able travel and watch or play some international tournaments I'm sure you will learn lots from the experience.
Posted by Chris Hanebury at 1:49:00 PM