Everyone knows there is something special and different about top Egyptian squash players. What exactly is it? Most are very attacking and appear extremely confident in their ability. It can certainly be intimidating, especially if you are a young junior. When I was in Malaysia recently for the Penang Junior Open there were a number of talented Egyptian players there and I made a few notes about their style of play and the reasons for its effectiveness.

What Egyptians Do
- they are confident and often win without doing anything because they intimidate their opponents. this begins in the knock up
- they hit it hard. this is part of what intimates their opponents
- they play to win and play aggressively. they have a plan and are ready to go from the first point
- they are passionate and fiery when they play and can be extremely verbal and fist pump after winning every point. they are very emotional and show it while they are playing
- retrieve well and are willing to dive. they give it everything to win each point and each match 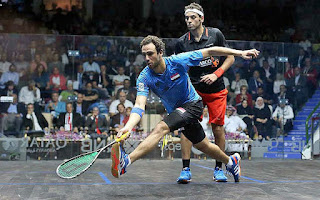 What We Can Learn From Egyptians
- confidence and body language matters
- be ready to go for the 1st point
- go in believing you can win and fight for every point, right out of the gates. never give up on a ball or a point
- pace doesn't mean someone can beat you, but it is a weapon. work on hitting it harder
- have a plan, play to win
- showing emotion and expressing yourself can be a positive thing, but can also be draining over the long run
- the knock up matters. focus on yourself and not on how good your opponent looks!

How To Play Against An Egyptian
- for me the main thing is to expect some or all of the things above to happen
- play your game and control your emotions (unless you are also an emotional player then it's ok to express yourself in a positive manner)
- focus on your game, not on theirs
- they may appear confident, but that doesn't mean they don't have the same doubts we all do. they just hide it better then most of us do
- never expect a game is over. you have to win every point and expect them to fight for every rally
- have a game plan. what is your strength? can you execute it? can you contain the Egyptians attacking game and pace? Can you attack them before they attack you? Or can you force them into long rallies and making mistakes as they lose their patience?
- don't give them too much respect. there seems to be an aura around playing Egyptian player. although they have many amazing players, so do other countries. if you're going to win you need to believe in yourself and that you can and will win.
- don't get involved with the ref if they stall, block, ask for cheap lets or begin talking with their coach between rallies. At least I wouldn't. I feel this distracts your attention and once it gets under your skin it's very hard to let go of it.

As I just mentioned you also have to prepare for things such as in this example here https://twitter.com/ChrisHanebury/status/606454996129869824
This just doesn't happen in Canada. There are some benefits for the Egyptian girl in this situation. It's like the coach telling her what to do during the match when things get tough and emotional. Her coach can calm her down and is playing a major role in the match. If you played someone like this what would you do? Do you say something to the ref or just accept that this could happen and let it go? It's hard to say which is the right answer. The ref in this situation wasn't getting involved with this and let this go. It was pretty shocking. It was evident that there is some bad blood between the Egyptians and Malaysians. This may have increased because of the incident at match ball in final of the girls under 15 British Open last year. The Egyptian coach was very outwardly expressive and passionate. We see coaches like this in American sports like football or hockey, but we aren't accustomed to this in squash.

I should also mention that I saw one Egyptian boy in Penang in the under 15 who looked very calm and relaxed (his score card below). Maybe it's because I didn't see him in any tough matches, but he was smiling and really appeared to be enjoying his squash. I don't know if this can be taught. It must be difficult as an opponent to play someone like this. You can tell they are just so relaxed and confident. I don't think this is something you can fake either. At the end of the day, squash is a game and it was refreshing to see someone at that level so relaxed and happy. 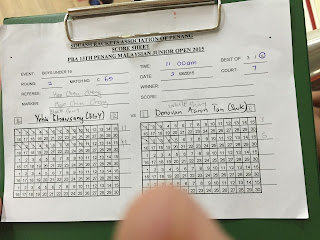 Here's a game I filmed of the girls under 13 semifinals. It's a very high caliber for 12 year old girls. The Egyptian actually lost this one in straight games. https://www.youtube.com/watch?v=suDYdJ0FU6c

The Egyptians are doing a lot right. Are they taking advantage of the rules or are the rest of us just not passionate and expressive enough about squash and winning? There's an argument for both sides and the ideal solution is probably somewhere in between the two. It's definitely more entertaining watching a talented Egyptian play.

Hopefully the next time you play an Egyptian you don't give them too much respect and let them win. If their going to win, make them beat you; make them play their best squash and use as many fist pumps and stalling tactics as possible. Believe in yourself and you have a chance; believe in your opponent and you don't.
Posted by Chris Hanebury at 8:34:00 AM