The Evolution Of Squash

I guess I'm dating myself by mentioning that when I was finishing up playing competitively I was still playing you had to serve to win a point and the games went to 9 with a set 1 or 2 at 8 all. After my last year of varsity squash the point a rally (PAR) scoring change was adapted by the College Squash Association. Once or twice a year I'll have the kids play this scoring method for a match and most of them don't like it. I don't blame them, I don't like it either, but back then it was how the game was played. The new scoring system has definitely changed the game. And although match times have gotten shorter at the amateur level, at the professional level the matches can still be nearly as long as each rally carries more importance (although I know this also has to do with how frequently they are mopping up sweat and video reviewing let decisions). The scoring, equipment and court have all contributed to the current state of the game and I'm going to discuss a few of the ways that I've noticed the change, both positively and negatively.

Back when you had to serve to get a point people generally went for more attacking play wen they were serving and played more defensive when they were returning. The idea that was you could take a bit more risk when you were serving because your opponent wouldn't actually get a point if you happened to make a mistake. It also meant that if you're serving you have at least some momentum and this is a more opportune time to play a more attacking shot. So this part of the tactics of squash has definitely changed. You'll see at the pro level players being equally aggressive when returning or serving because they can score a point at any point. 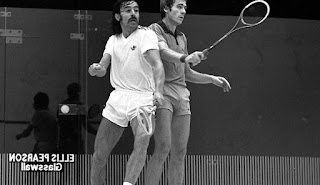 The scoring has helped and hurt beginners. It is less likely that a player will get bagled playing PAR scoring, but they can also lose a game in the blink of an eye. This is why I still encourage new squash players to play to 15. Squash is only fun when you're having rallies and you get a good workout. If a game is done in under 5 minutes it's way too short to accomplish both feats.

The scoring has changed the tactics in a number of other ways too. Currently it is much more difficult to come back in a game. Back in the day people came back from down 0-8 or 1-8 quite frequently. Nowadays you very rarely see someone lose a game when leading 10-0 or 10-1. It's simply a matter of stats in this case. The person at game ball only has to win 1 point and not 2 in a row with the old scoring method. So this can be good and bad depending on which style of player you were. If you are a slow starter you would probably do better with the old school scoring method. If you're also not as fit you're probably better suited for the current style because you find it easier mentally to push even when you're fatigued for that last point or 2 knowing all it takes is 1 good shot or lucky bounce.

Going along with the theme of fatigue is another issue that is lost on current players because of the scoring system. When you had to serve to score a point players would be more prone to lose their concentration in a match. Nowadays big points near the end of a game come up quite quickly where focus is generally not as big of an issue. You are also more likely to have adrenalin pumping to help you fight through the fatigue when the end is near. When the games were to 9 and players traded a number of handouts without scoring more than a single point it was very difficult, especially as a kid to keep your concentration for the duration of a game. Generally juniors go through more ups and downs emotionally and with their focus so the old school scoring method did not favour them for these reasons.

Many of us associate the new scoring to the more attacking style of play, but is that really the reason? Is the equipment, lowered tin and slower double yellow dot ball or glass court not more critical factors? The racquets are lighter, the grips aren't made of leather or towel and the string allows for more power and spin on the ball. Also with the wide use of video analysis and elite coaching, players are learning to add all the extra layers into their games that were probably going unnoticed many years ago. Although the scoring has made a significant change to the style of game I believe these other factors have had a larger influence.

I don't know anyone that wants to see a 100 shot rally with only length hit, but a 50+ shot rally using all 4 corners is exciting and much more physically demanding. This style of play has changed the fitness requirements required to play squash. Back in the day aerobic endurance, one's ability to tolerate pain and their mental toughness were probably the most important traits of a successful squash player. Nowadays these are all still important, but speed, agility and power are much more critical. I've noticed that Gaultier and Matthew are looking a bit slower compared to some of the young guns currently rising up on the tour. No doubt that Matthew and Gaultier would still do exceedingly well at aerobic fitness tests against any other pro payer, but naturally your body slows down just a bit when you get in your mid 30's (yes I know from experience!). I feel if the tin was raised back, the scoring was changed back to 9 and the equipment was from the 80's or 90's they would still be winning almost every title. I think Nicol David would also be more successful under these more attritional conditions. Actually, Gaultier has more problems with his concentration so maybe this wouldn't help him as much as Matthew. Although these conditions may favour certain players, I'm glad that the equipment and scoring has changed as it's made squash more entertaining to play and watch. 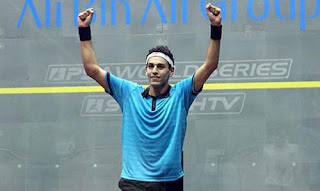 It's easy to see that the players have evolved because of the equipment and scoring. Do we have the right balance between attacking and attrition? I wonder how the game will evolve in the next 20 or 50 years? Hopefully it stays attacking, but also remains physically demanding. It's the balance of the technical and tactical skill under extreme duress which makes the game so challenging and breathtaking to watch at the professional level. Watching a few of the hardest hitters play I do think the ball needs to slow down just a bit or the court temperature drop. I don't enjoy watching a player like Mohamed ElShorbagy win on sheer power (he would definitely still be one of the top back on the higher tin with the old scoring). ElShorbagy once had a really solid short game, but I haven't seen it on display much this season. Gaultier too relies mostly on attritional length to win. If the ball is so fast the players can't attack short when they get an opening the ball is a too quick in my opinion and we are on the verge of bringing back attritional squash. If I was ElShorbagy I would ask for a new ball at the start of every 3rd game in his matches because I can't imagine someone maintaining the pace he can create with a fresh ball.

Maybe the men should lower the tin another inch or just use a 2 dot ball on the glass court instead of a 1 dot. Just pace and athleticism takes away from creativity and the chess tactically gameplay that I love about squash. The pace has made ElShorbagy a 2 dimensional player (court coverage/endurance and pace). I see so many kids now that only focus on hitting the snot out of the ball and don't develop other areas of their game. And what's troubling is they don't know any better because they get away with it against most other juniors. I want to see the layers develop in a players game and to all be on display at the highest level of the game. It's up to the PSA and the WSF to ensure that tactics and creativity are continually rewarded at the top of the game. I understand that speed and pace are critical factors (as they should be) they just shouldn't be the only ones in my opinion. As a coach if I want a player to attack more I simply add targets or bonus points for winning or hitting the target at the front of the court. I just hope squash doesn't fall into the grip it and rip it and the best athlete always wins as opposed to best squash player. The game scoring, equipment and tin height have all attributed to rewarding attacking players and making the game more enjoyable to watch, but have they done enough? If the PSA wants to see more Superman dives they should give players more opportunities to be out op position on the court by either lowering the tin, slowing down the ball so the ball stays shorter on drops and boasts, making the court longer or wider or adjust the scoring once again!

I can't finish off today's topic without a quick mention about the rules. This is a simple way the game must evolve to improve squash from a players and spectators perspective. There is so much inconsistency between refs and left open for interpretation. The 1 obvious rule which is always taken advantage of is giving your opponent direct access to the ball. Most players appear to think that just because their opponent has hit a loose ball around the middle and they are standing around the T that their opponent must go around them. To my knowledge this is not stated anywhere in the rule book. I also can't stand when players counter drop and don't clear out afterwards. The ref often states the shot was too good, and although that may indeed be the case, who really knows if the player doesn't have any chance of retrieving it. I don't know why they haven't made it a stroke decision every single time a player hasn't made every possible effort to get out of their opponent's direct path to the ball regardless of the quality of their shot. Good players know exactly where their opponent is coming from and they can get out of the way if they were forced too or otherwise they may choose to play a different shot when they would otherwise be unable to clear their drop. So please WSF and PSA change this rule and get rid of the blocking and reduce the number of 'lets' called in our game and clean up the flow of the game. Who's with me?

Have you checked out the new items at SeriousSquashShop.com yet? Yes, I've designed some Serious Squash merch! Pick up a cap, hoodie, bandana, tee, tank top or a sport psych wristband! Use the code 'SSROCKS' to receive 15% off your order.
Posted by Chris Hanebury at 10:15:00 AM