This is the first time I've gone to the US Junior Open since I played it many moons ago!  Today I'm going to write a few of my observations, both good and bad about the event. Obviously it's amazing to see so many strong juniors playing, but this also comes at a cost. 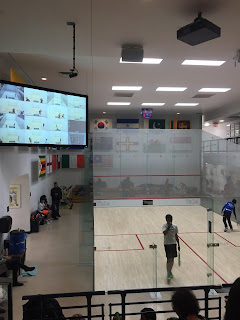 Sports in the US is a big business, from high school football, to collegiate sports all the way to the pros. As expected you definitely see this trickle down into the junior level of squash. When I was a kid my dream was to be world #1 and I support any kid that is pursuing a dream, no matter how outrageous it may seem to the rest of us. So I love to see how much stronger the quality of squash is at this event. When I was playing it there were almost no good American players and virtually nobody would come from overseas to participate. It was basically a second Canadian Junior Nationals. This year they have waiting lists and limit draw sizes to 128 kids. Kids are coming from all over the planet to play just this single event. The British Junior Open is still the strongest event for juniors in the world, but it is now limited to players at the top of their national junior rankings. Meanwhile at the US it's open to whoever can afford to came the trip and signs up before the entires fill up. My guess is that a lot of kids playing the British are dreaming of playing pro squash while most (not all) of the kids playing the US are simply dreaming of collegiate squash.

Under 17 winner from Mexico sliding into a shot

A big draw for the US Junior Open is the opportunity to get noticed by some varsity squash coaches taking in the action. As great as an opportunity it is to play in front of college coaches it also brings a new level of pressure onto the outcome and performance of the kids, especially those in grade 11. But is this pressure a bad thing? If a kid makes it onto a college team and their match is the deciding match that comes with a lot of pressure as well. In the end I think it's an important lesson for the kids to learn how to just go out and play and keep their focus on what they can control. In the end it's still squash and that's what they've been doing almost every day for many years now. 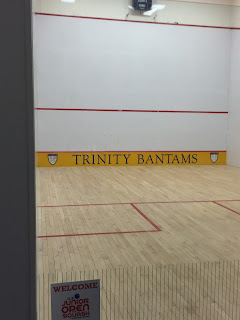 I can't write a post about the US Junior Open without discussing the amazing venues. If anyone hasn't been to Yale before the squash facility is just as impressive as the rest of the campus. They have 16 courts, 3 of them show courts and all have permanent video cameras and electronic scoreboards. But when you have a tournament of 99+ kids 16 courts is not enough. They used 4 venues in total for this event. Trinity College has older courts, but is impressive in their own rights. Trinity has about 9 or 10 courts. Trinity is normally about an hour commute although when I went it was through a big snowstorm and took about 2 hours on the tournament shuttle school bus. Most times I took a shuttle the bus driver had no idea where the squash courts were and there were no signs posted at the alternate venues directing us. Something that can and should be addressed in future years. 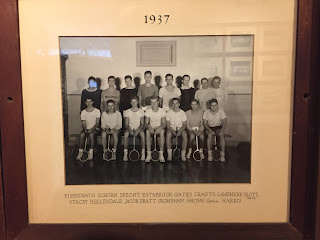 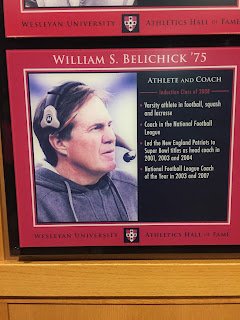 Bill Belichick not only went to Wesleyan but also played on their squash team!

The other 2 venues were Choate and Wesleyan. Choate is a prep school which has 10 courts and was about 45 minutes away from New Haven. Wesleyan was just under an hour away and had a beautiful 8 court layout. So in total the tournament ran on about 45 squash courts! It must be such a huge undertaking to organize I can't even imagine how much time this takes. I was trying to coach 4 kids over the event and was unable to catch all of their matches. I had to shuttle back and forth to a lot of different venues and on the 1st day I spent about 5 hours on school buses trying to get through the snow. If you're planning on bringing your kids to the US the multiple venues and distances between them is something you will need to consider. This made me wonder if they should change the format to make the tournament easier on the athletes, parents and coaches? At the Penang Junior Open the tournament runs over the course of 6 days. Why do they try and compress the US Open to 4 days? All of the kids are done school by now so I don't think that's an issue. Some kids had up to 7 matches and and when they're all tough and long this is brutal on the body. No amount of training will allow you to be fresh and play your best squash by the last day. Those that did must have had some easier matches on their path. They could also list draw sizes to 64, but again I like the large number of kids participating in this event.


A short clip of the 2 show courts at Trinity 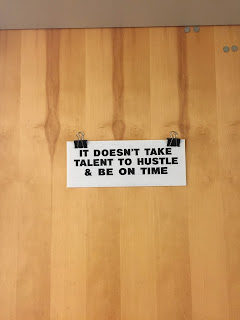 One thing I noticed over the event is how many knee bandages kids had on. Having had knee problems myself I know how demanding squash can be on the body. I don't ever recall seeing so many knee tapings and light braces at a junior level. But this goes hand in hand with the much stronger level of squash we are witnessing nowadays. This also makes me think about how important it is to do the proper amount of off court strength and flexibility training to keep your body healthy and able to take the pounding to this unilateral sport. It's also critical that kids learn to rest and allow their bodies to recover while also spending more time doing easier stuff on the body like solo hitting.  As I'm always saying it's critical to learn how to hit off both legs in practice so you can share the load of the work in competition. Playing at the highest level requires pushing yourself mentally and physically beyond your comfort level and when you're doing this at any age your more vulnerable to injuries. You also need to be smart and if you can be sure to work a trainer and have a good physiotherapist you should be proactive; don't wait until you begin having problems to start doing something about this. 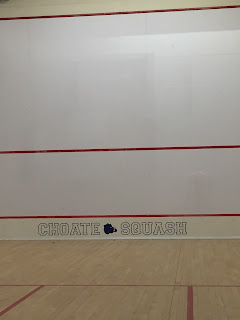 Wouldn't it be nice to have 10 courts at your high school? Choate does

I already mentioned that the caliber is a lot stronger than many years ago, but how is the type different from when I played at college? The basic American squash player used to only hit length and be very fit and patient. You still see some of this, but I did see much more that this basic style of play. The pace and explosive movement is definitely what I've noticed changing the most. I also saw a lot of players using the counter drop quite a bit. Another tactic that I saw used a lot is attacking short and poaching to volley the inevitable crosscourt. The strongest kids were generally the ones that moved the best, were accurate and made good decisions. It sounds simple, but there's so many strong kids in each group it's incredibly difficult to separate yourself from the pack. Basically everyone is making everyone better and this only means good things for the sport. In my opinion one area of weakness for many of the kids their mental game as they get too involved with the refs. Also playing this many matches in such a short time many of them will have to dig deeper mentally into their reserves then ever before. I definitely don't think a kid can just play squash and do well beyond the under 13 category. The kids need to be good athletes and work off court to be fast, fit and powerful enough to compete at this level, let alone excel.

Lastly I want to discuss the parents. In the US you see a lot more parents overly enthusiastic about their kids performance. Sometimes in the big points I would look over to the parents and see how intense their reactions were. I didn't take any pictures of this, but there's definitely some lines being crossed here. I'm not a parent so I can't imagine how involved and attached a parent is to their kids' games, but in the end it is a game and it should be fun. When I hear parents start chirping to the ref I feel bad for the kid. In Canada I feel like overall the parents are very supportive of their kids and the motivation to train and compete is coming from the kids. In the US I think some of the parents are pushing the kids because they want their child to be the best and to get onto a prestigious varsity team. I think that's the job of the coaches to push the kids in squash, not the parents. When these roles get crossed there is potential for problems and an unhealthy relationship at home and the love of the game can be tarnished too. If a parent can't control their behaviour and reactions when they watch their kid compete they may be better off not watching. 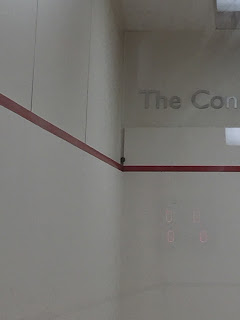 Haven't seen this 1 before (at Yale)

I think many people (including some coaches) forget that even though this is the US Junior Open it is a learning experience and not a professional tournament. Try your best, leave it all on the court, have fun and learn your experience At the older ages you can tell the difference between the kids who have trained for many years because squash is their passion and those that have external pressures on them to go further. If the passion and enjoyment isn't there eventually the wick will burn out. This is why I always focus on the process of performance rather than results. I already know we all want to win, we're out there competing and the best way to have the most success long term is to constantly learn and try and improve all areas of your game. I know most people will compensate this philosophy to win and they will pay for it long term. Play your game, play the right shot and enjoy the challenge; may the best boy or girl win. And if you're not the best you will learn what you need to work on so remember there are extremely valuable lessons to be learnt from your loses.

I'm having a holiday deal at SeriousSquashShop.com For the remainder of 2016 enter the code HOLIDAY30 and receive 30% off your order!
Posted by Chris Hanebury at 12:25:00 PM