Cocking Or Relaxing The Wrist?

When I was a kid pretty much every single good player cocked their wrist. Cocking your wrist allowed for improved consistency and power. The open racquet face at contact helps keep the ball above the tin and allows you to hit with an open racquet face and slice the ball. Your racquet face would always be presented properly to the ball allowing for a more consistent strike of the ball, unlike those that break their wrist. The increased power is from the last split second wrist movement. To explain this try and take a swing keeping your wrist cocked the entire time. Without that wrist moving you are not going to be able to transfer weight though the kinetic link properly. My point being is that there were lots of important reasons for learning to cock your wrist and I remember it being a difficult concept to grasp. 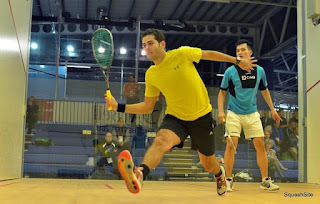 Gawad with a short backswing, but a cocked wrist gives him lots of options from this setup

Nowadays you still see the top players cocking their wrist, but you also see some (like Ramy) play with a relaxed and uncocked wrist. The style and equipment has changed which has allowed for more variation in technique and how the game is played. I thought it would for an interesting post to discuss the pros and cons of cocking your wrist versus having a relaxed one. Clearly a top player with enough repetition can make either work, but even for a top pro there are pros and cons to having a more relaxed wrist vs a cocked one. 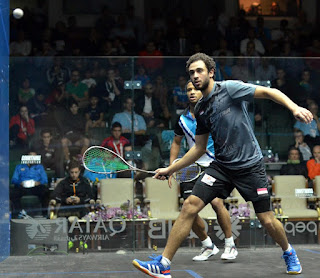 Ashour with almost no backswing whatsoever and a relaxed wrist

I should begin by saying that players who have this relaxed wrist don't actually break their wrist. By breaking their wrist I mean the back of their hand and arm making an angle larger than 180 degrees. Someone like Ramy has such a short swing from the mid and front court that he is incredibly deceptive and quick from the start of his 'down'swing to contact. If you watch this short video I filmed on backhand drops you will also see how this relaxed wrist position allows for less tension in the hand and forearm which allows a player like Ramy to fire the ball in short with superb precision. This changes the angle of the swing, contact point on the ball and therefore the amount of spin you can generate. For example, on the backhand Ramy just swings his arm and side of his palm directly to where he is aiming at meaning he hits the bottom part of the ball (an example pictured below). While dropping with a cocked wrist anabas you to hit more the back corner/side of the bal. In theory I can see how a relaxed wrist can allow Ramy to be more consistent because there is a shorter backswing and less tension in his arm because he doesn't need to hold the racquet head upwards. From a shorter backswing one can also begin their swing later so their opponent has less time to read what shot is coming next; that is assuming they are strong enough to still hit it deep from this position.

When a player cocks their wrist (as I do in the video above) you'll see my racquet head is above the ball and I can hit down more severely onto the ball. I always tried to think of the tin as a form of net and the higher above the tin the ball is when I strike it the better angle I have to spike the ball downwards, which means more pressure I can put on my opponent. I also like the feel of the ball on the strings when I cock my wrist for my drop shots. I feel like I can get more action on the ball when I have my wrist cocked. I haven't taken enough swings like Ramy does to feel the same control or touch that he does with his flatter swing with his relaxed wrist, so I will probably never be able to switch. If I was going to try and drop with a relaxed wrist the difficult part would be that I'd be 100% committing to the drop. With such a short backswing and a relaxed wrist there would be almost no power behind my setup meaning my opponent knows what's coming. Ramy is so strong on his forearm that he can still snap the ball with some pace with just about zero tension in his arm or backswing. This is something that was simply impossible 20+ years ago when the racquets were 200 grams. Now with the lighter frames and improved strings there are a lot more possibilities. 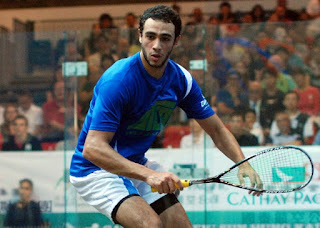 Ashour on the backhand side with again zero backswing. The racquet starts at his leading leg and he can still hit the ball to any part of the court

So now I've got you thinking. Should I try and cock or keep a relaxed wrist? That is something that a good coach will need to help you with. I think only a really top player could make the relaxed wrist position really effective. I still coach players to cock their wrist, but if I came across a very skilled player that already had this style I would not try and change it. I can see the benefit from this relaxed wrist if you also have the snap to go deep from that position too. If you don't have the snap your opponent will be running up to get your shot every time they see that relaxed wrist and short backswing. So unless you spend multiple hours each week working on your short game, that probably isn't going to work at a high level.

What I've discussed so far is the benefits of cocking or not cocking your wrist on drops, from attacking positions from the mid or front of the court. From the front under pressure when counter dropping you will have to break your wrist to one up your racquet face to the target and to play the ball in front of you. This is the only time I break my wrist when I play and it's really difficult for me. I found a picture of Alison Waters doing this on the backhand side. 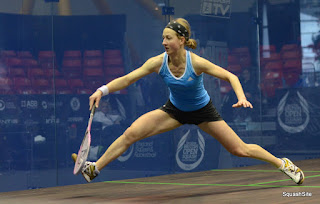 
From the back of the court I do feel cocking your wrist is a big advantage because it's the best way to get the ball back deep and above the tin. If you don't have a lot of time to prepare at least when you cock your wrist your racquet will be aiming up and you will have a better chance of getting the ball back deep. Also, when digging the ball out of the back corners when you're space is limited it's also important to cock your wrist to use height on the shortened swing.

But when you have time (as Ramy does below) and you're prepared early and you're not trying to play defensive you can play with a cocked or relaxed wrist. You can imagine that from the set up below most people could not get enough of a whip from this setup to get power into their shot or it would take too long that they couldn't get away with it. Ramy has hit so many balls I believe everything is about feel and he doesn't focus on his technique at all. He knows by the feel of each swing if it was hit perfectly or not so for him he knows that he is set up exactly how he wants to be. This is the one thing I think is a huge benefit from the relaxed arm; you have less tension in your arm and you can feel the ball better against your strings. One area from the back which I should mention is if you're trying to hit a hard and low attacking drive. This can be played a few different ways. Some people (mostly the Egyptians) still hit this shot with a very open racquet face and simply have a flatter or more sever swing path to hit the ball low. 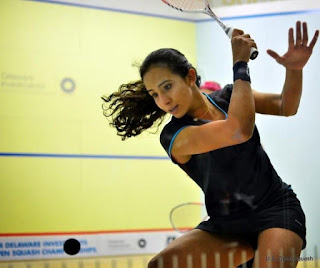 Nouran Gohar has a lot of shoulder rotation in this shot, but still has a slightly cocked wrist and open racquet face

I like actually closing my racquet face or even using some top spin. When I close my racquet face or hit with a bit of top spin my wrist is still cocked, it's just about how I rotate my arm over. So if you can picture this it may help. On the backhand side if I want to hit with a closed racquet face I simply have a forehand open wrist and arm position. Can you imagine this? I found a pic of Karim Abdel Gawad doing this. See how if he kept everything the same and just brought his racquet to his forehand side it would be a nice open racquet face. His wrist is still cocked, but is just facing down. 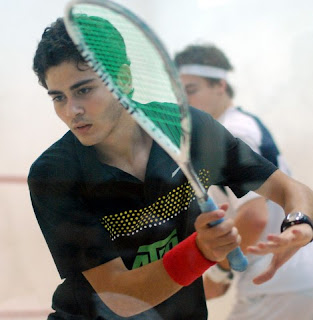 Hopefully I've expanded your knowledge on this subject. To me it's a really fascinating topic. It was such a keep fundamental and then to have the best player of our generation not always do it was pretty mind blowing. It definitely shows that technique is not universal and if you can make it work consistently even under pressure maybe it doesn't need to be changed. Maybe coaches and players focus too much on technique and less about feel and shot selection? Basically these types of things make me think more open minded about squash and the technique in general. Peter Marshall should have taught us all that, but we haven't see that style at that level again since. So just because Ramy can do what he does, it doesn't mean you should try and copy it. It works for him, but it probably won't work for you unless you have fantastic hand-eye and spend about a quarter of your life on a squash court! If you're tinkering with this I still recommend not going past the 180 degree point at any part of your swing (besides the counter drop under pressure at the front) from the back of your hand to your forearm. Remember the title is called cocking or relaxing the wrist, not breaking it! Hope this topic was as interesting to you as it was to me.

Be sure to like Serious Squash on Facebook and follow my Youtube channel (cchsquashpro) and also on Instagram at #SeriousSquash for daily updates. Serious Squash also has a new online squash merch store at SeriousSquashShop.com Use the code SSROCKS to get 15% off your order and yes, I do ship worldwide.