I always enjoy not only coaching my only athletes at the nationals each season, but also watching the top kids and how they're developing. I wrote a review from a previous nationals and I mentioned that kids were not shooting enough. That has certainly changed and today I'm going to go over a few other things I noticed from the top kids. Here's a link to the draws if you want to take a peak: https://squashcanada.tournamentsoftware.com/sport/draws.aspx?id=0B5066C6-BCD8-48CD-B57A-ADF9E4B706B6

The nationals this year was held in Vancouver, British Columbia. Although we weren't at altitude 4 of the 6 courts were quite bouncy while the 2 back courts were quite cold. Kids definitely had to be able to make major adjustments to their targets, T positioning and tactics depending on which court they were on. The 4 bouncy courts tended to lead to a lot of overhitting by the older kids. I was quite surprised how the top kids rarely hit a medium paced drive; they either chipped the ball with no pace whatsoever or they hit the ball as hard as possible, which would land way too short or bounce way off the back wall. So for me 1 of the biggest problems was the lack of dying attacking drives from the back of the court. Because of this lack of well weighed drives there was an obvious lack of volleying from the midcourt as well. Here's a short clip on how to easily practice some attacking drives.


Another challenge on the bouncy courts was bringing the ball short. The kids still went short, but they were still trying to hit winners. The top kids are all excellent athletes and very fast so trying to hit outright winners with a bouncy ball certainly cost them more mistakes. I really think they should be aiming for the angle of their drops and to get them tight and focus on them being a working shot, not an outright winner. Their so fast there's no need to try and hit a drop with no margin when they can cover the next shot anyways. It's the mindset that really needs to adjust here. They should focus on working their opponent and making them do hard movements and pop out lose balls by being accurate with their weight of drives and keeping their drops tight. And here again is a short clip on volley drops. Hit it with slice and get it finishing tight off the volley. If you aim for the nick it will likely bounce back away from the wall with such a hot ball.

An area I see some of the kids developing nicely is deception. A few of them have some nice holds from the front of the court. This holds true for even a few of the younger kids. It's enjoyable to see different styles and a more attacking brand of squash being played by the top kids. Even though they often play the attacking shot incorrectly and force the ball short when out of position it's a better to be a little overly aggressive than passive for their long term development in my opinion.

There's something that was blatantly poor from almost all of the kids at the event. This was their serves. I can't recall how many times many of the kids would simply put the ball in play and hit it right to their opponents racquet without breaking it off the sidewall. There was also very little creativity in serve variation. This is something I remember hearing a lot about when I was young and I guess kids still overlook the serve and the importance of how it can set up the rally.

I can't wrap up this summary without a quick mention of the refs. Oh boy. I hate picking on people that spend 4 full days doing a thankless job, but there were some pretty brutal decisions. I witnessed foot faults and no lets when strokes should have been awarded. I heard that the refs were told to make the players play the ball and to award no lets if they didn't make every effort, but clearly when it's an obvious stroke this shouldn't apply. I also think a foot fault warning would suffice. It's also disappointing that a few matches ended on blatantly incorrect decisions. This did demonstrate how well behaved almost every single kid is at this event. I was pleasantly surprised with how well the kids handled the refs calls, even when they were match decisive.

Lastly, I'm more than a bit concerned about the future of our top kids. They've clearly dedicated their lives to getting to the level their at, but where to they go after juniors? I'm sure some will go to a school and play squash, but what happens after that or if they want to pursue a pro squash career instead? There is zero system in place that helps with this process and there is no funding for them as well. There's also not enough small PSA events throughout Canada that these kids would be able to compete in to gain some affordable experience. As of now there's only 2 options in my book. The first one is to build up the resources themselves around them. It takes a big support team around an athlete to help someone play successfully at the pro level. This option may indeed be best set up at a top post secondary squash team at the moment. 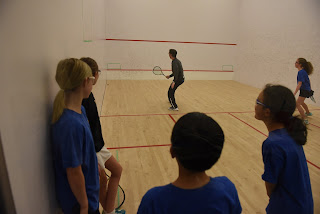 The second option would be to go to another country and try and get in a training group with some other pros. There's many pro leagues in Europe which you can play in and make some extra money in. It's really a shame there isn't a better system to help our top kids get from juniors to the pro level. Instead of Squash Canada worrying about if they should have a under 11 divisions and specializing an athlete too young, they should focus on helping those that have dedicated their lives to squash and have no system to help them take the next step. We all have ups and downs in our squash career and it's so important to have a team to help keep you in line and on track during those dips in confidence or motivation. 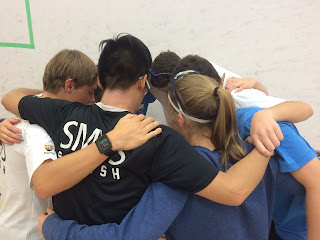 Did you play in or watch any of the Junior Nationals? Please share your thoughts and stories. And if you were 1 of the kids that had some troubles with the areas I mentioned above, checkout the new film I recently released. The Secrets of Solo Hitting is a 64 minute advanced instructional film which contains 30 of the best solo drills. The drills are sectioned into 3 categories: Straight Drives, Midcourt/Volleys and The Short Game. There is also a Technical Testing section which would be extremely useful to use over the summer months to set some goals as you develop your technical skills and consistency. Over 70 copies have been sold so far to people from all over the world. Check out the preview video below and order your copy today at SeriousSquashShop.com/collections/coaching-video