Earlier this week I did the 120 shot ghosting routine. Many years ago Squash Canada would use this as a fitness test for it's top athletes. Even watching my own movement here I noticed how I made technical errors in routine skills near the end of the drill as fatigue set it. Let me explain how the ghosting works and then at the bottom I'll post the video of my attempt.

As you can see in the image below I drew this out. In diagram 1 there are 2 separate movements patterns, both going front to back. You hit 20 shots per side with no break between. The middle diagram is the diagonals so after you complete these this is 80 shots. Finally you ghost the back 2 corners for 20 shots and the 2 front corners for a total of 120 shots, equivalent to a 240 shot rally! I believe back in the day they wanted this test completed in under 6 minutes, possibly under 5, but I'm not certain. I did it 6 minutes and 27 seconds, but I'm definitely not training to play professionally so I'd say it's pretty good for a coach.

Some tips when you do this:
1) try and hit a variety of shots and visualize the ball you are striking
2) don't worry about stopping at the T since it's a timed test
3) use both legs to hit off of
4) hit some drives and drops and lobs from the front. Drops are easier to clear and it's easier to stay further from the ball so yes I could have went faster if I did all drops from the front, but I wanted to practice my movement off of other shots to and from the front corners
5) get right into each of the corners for each shot
6) I like focusing on shaping up early for my shot anytime I do ghosting so remember this isn't simply a footwork and aerobic exercise 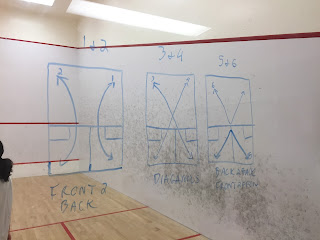 Currently all Serious Squash mech is 50% off with the code 'iamserious' I leave for the Canadian Junior Open on the 8th and am on holidays until the end of December. So if you want to get some new squash gear for the new year order before the 8th. Also, be sure to check out the 2 Serious Squash instructional films (The Secrets Of Solo Hitting and Mastering Deception) which are both also available at SeriousSquashShop.com