Mostafa Asal and Other TOC Observations

I have watched quite a few of the women's matches and there's been a number of surprising results, but today I'm going to focus on the phenom, the Raging Bull and some of the strange calls I've witnessed.

I've mentioned Mostafa Asal in a few previous posts as I saw him play at the World Juniors in India in 2018. He won the individual event without losing a single game. Now under 2 years later he's top 20 in the world and at the Tournament of Champions he had some huge wins. Asal beat Ramit Tandon, who I have also seen play in person in straight games. I didn't get to watch this match, but I saw his next 3. In round 2 he upset one of my favourite players, Mohamed Abouelghar who again I have also seen play in person. Yes, Asal played well in that match, but I thought Abouelghar was pretty flat and was probably a bit edgy and nervous playing a young up and coming junior from his native land. 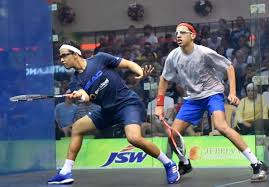 For some reasons when 2 Egyptians match up they don't always play their best squash. A great example of this is if you look at the Tarek Momen and Marwan Elshorbagy match which was quite scrappy and the ref was far too involved. We don't always know the background and hierarchy back in Egypt, but there seems to be something holding some of them back from focusing on their squash when they compete against one another.

Asal against Gaultier was one of the most hyped matches in recent memory. Gaultier had a long delay after being off with a career threatening knee injury. Gaultier is one of the greats and the oldest player  that's still competing at the highest level. The last time he lost to a junior was probably closer to when he himself was a junior. The match lived up to the hype and was quite entertaining. Gaultier started off strong and looked the superior player in the first, but lost the momentum due to a minor blood injury delay between games. Asal looked nervous to be on this stage at this moment against this player, but the extra time seemed to give him some time to settle down. When game 2 started Gaultier's game slipped a bit and Asal was more relaxed. It was fantastic to watch 2 greats who are on opposite stages of their careers. 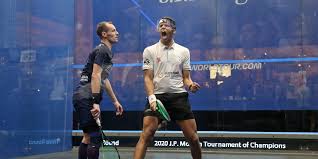 I heard that Asal didn't start playing squash until he was 11 years old. If that is indeed true, it's hard to fathom how he got to the level he's at in just 8 years. Absolutely unreal. Certainly his size and strength has something to do with this, but he strikes the ball so clean and has some beautiful holds. I'm also impressed how quick is racquet preparation is for having such long arms. His swing can be big when he wants to crack it, but he can keep the pace up under pressure with the best of them.

I can't recall any other junior player who was able to overpower top seasoned adult pros. His hard hitting is right up there with the likes of Mohamed Elshorbagy and Simon Rosenr. Asal reminds me a bit of John White. White had the power, but also great soft touch. Being world class at both extremes is a rare quality and is a big reason why he's playing at a top 10 standard.

Some people have questioned Asal's movement. He's not the most fleet of foot and he's a big strong boy. How is someone at that size going to hang in there for 60+ minutes against a fleet flooded Ali Farag or Tarek Momen? Can he hang in physically with the likes of Paul Coll? Those who saw Asal go down to Momen convincingly in the quarters will know this is a question that will be continually asked until he is able to do this. About his movement, I have never seen someone play so many shots with just the split-step +1 more step. Some players have quick feet, but Asal seems to have the luxury of the strength and reach. 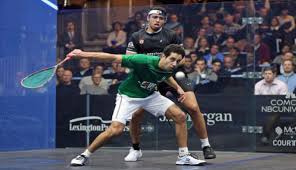 Asal is like a heavyweight boxer and like most I'm curious to see how his career is going to unfold. With the retirement of some of the greats recently retired (like Nick Matthew, Ramy Ashour and Amr Shabana) we need some new players to fill these shoes and Asal in his different coloured shoes definitely does that. I bet most of us believe it's only a matter of time until he's world #1, but I think it's going to take a few years until he is going to be able to beat 3 or 4 of the top 10 players back to back to back; Diego Ellias is still trying to accomplish this. I can't wait to see him play Mohamed Elshorbagy since they are both such powerful players, but are very different in terms of their technique, tactics and movement. I also can't wait to see him play Paul Coll and Gaultier later in the season when he's back close to his best. Will he be able to beat Momen? Moment has shown to be a nervous player, so if he goes down a game to Asal he's got a real shot. I think every Egyptian senior will feel some pressure when they step out on court with him and Asal will be playing with house money. 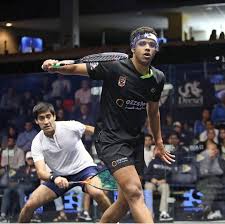 One area I feel is unfair for Asal is having to wear eye guards. I don't believe anyone regardless of age should be forced to wear eye guards in a PSA event. I know it's not a major disadvantage, but he's not a normal 18 year old and I'm sure he would be fine playing without them.

Here's a few of my other thoughts about Asal. At his size there are going to be some traffic issues, plain and simple. I've heard complaints about his movement and on court behaviour. I've heard of 1 event where he was whining and used a fake injury timeout to make a phone call, presumably to his coach. I haven't seen all of his matches on Squash TV, but I haven't seen much to warrant a debate during the TOC. Back when I saw him play at the World Juniors he was so much better than everyone else the ref was never an issue. I've worked with juniors for a long time and I know sometimes you have to give them some slack. Learning to behave appropriately on court in the heat of the moment is something that takes a long time to develop. Just because Asal doesn't look like a junior, it doesn't mean he's not still one. Learning to clear properly is something that is still rarely done on tour and it's up to all of the players and refs to improve this.

I loved watching James Willstrop and Joel Makin play. Those 2 went through and played almost every ball and it produced far more enjoyable rallies. The sweat on the court floor was a bit of an issue and is something they need to find a way to fix. Almost every other match I watched players constantly took advantage of certain positional situations. The one area driving me nuts is when a player hits a straight volley drop (normally on the backhand side) and their opponent moves sideways into them and gets a stroke because the drop isn't right on the sidewall. I don't see many of the players moving to the T too quickly or sticking their back leg out, blocking a direct path anymore. I do however notice this new stroke position so much that some players are changing their shot selection. If there isn't a path, prove it by trying to go through to play the ball. There's also still a lot of players shaping their racquet around another player and exaggerating their preparation to show that they are being interfered with. 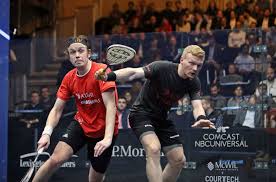 Willstrop and Makin demonstrated that the players have the ability to play around each other, but most of them have gotten into the habit of taking the cheap stroke instead of doing the work to play through minimal interference. It's so hard to win a point at this level, so any cheap stroke is happily taken. I think they should start fining players for fishing or playing the man/woman. It's still crazy how refs sometimes give no lets for a shot when their opponent is directly in their path. Is this not an easy fix? If they don't have a DIRECT path it's a stroke regardless of shot quality? If they did this people would get out of the way or not hit it into the same corner when they're not able to properly clear. Pros know where their opponents are and are moving from, so they can easily provide a direct line if they were going to be punished accordingly. Are the amount of type of let decisions frustrating to anyone else? 'Lets' clean up our game and make it greater!