If you're following Serious Squash on social media you'll already be aware that the club I work at has opened back up today! It was a lot of work to get the club to a point where we are. I was on a 4 person Covid board to ensure we are following all of the government safety protocols. There's been a lot of changes, but we are finally open, even if it is just for solo hitting at the moment. If you're interested in what changes have been put in place I made a short video which highlighted many of the safety protocols.

On top of what I mention in the video there are a few other policies in place. We originally had a finger print scanner at the front door and 24 hour access, but obviously having people place their finger on the same scanner is a way the virus could spread so we have just switched to a key fob system. We also must have a staff member when members are in the club now, so we have temporarily switched our hours to 8am-8pm. 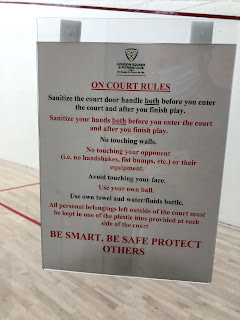 The Club's On Court Rules

Court times have been staggered and are only 30 minutes in length. You must also book a court prior to coming to the club. There's 15 minutes after each court booking to allow for a thorough cleaning of the court, bin and chair. When your'e on court you are expected not to touch the walls with your hands (even though the club staff will clean them afterwards). Demon racquets are not permitted and members are allowed to grab their equipment from their locker, but they will not be able to use their locker going forward. The saunas, showers, bar and gym are also not open yet. This will all happen in future phases.

Because the club, like a few others in Ontario are only open for solo hitting at the moment I've been posting some old Serious Squash solo drills. I will be filming some new drills this week which I will be posting over the next week. If you haven't already seen what I've posted so far I will post the videos again below. Most of these drills are for intermediate to advanced levels, but I will be filming some beginner drills shortly.

The Secrets Of Solo Hitting

Hopefully your club is opening soon too, if it hasn't already. I know I'm really excited to hit a few balls later today. It's been about 3 months for me now, which is the longest I've gone without hitting a ball in many years.

If you want to do some squash training at home with me follow London Squash (@LondonSquash) on Instagram. I've been doing weekly training videos on their account. Normally it's around noon or 1pm on Friday's, but it's also weather dependant as I do these outside.

You may have noticed that I removed the instructional films in the Serious Squash Shop. The platform I used to allow people to download the films was pretty pricey and when clubs were closed people weren't purchasing copies. In fact my online store is up for it's annual renewal June 15th and I'm debating pausing it for awhile until squash gets up and going again. So if you do want to purchase a shirt, racquet or a video analysis I suggest doing so in the next 2 weeks.

That's it for this week. Stay tuned for new solo drills and if you have any questions about the opening of our club let me know. Happy Squashing!

Squash Shots
SeriousSquashShop.com
Posted by Chris Hanebury at 9:12:00 AM