Squash Canada recently announced their fall schedule which will include the make up dates for the 2020 National Championships. Solo hitting is now allowed in many clubs here in Canada so it's great to see us getting a bit closer to our 'new normal' which will include squash. For the upcoming national championships Squash Canada selected hosts which have previously hosted large events which will make the operations run slightly smoother, if indeed they do run as planned. I realize every athlete wants the opportunity to play in their annual national championship, but we are in uncertain times.

I'm going to go through a few of the reasons I have issues with this rescheduling. The first being is that people outside of Ontario are not going to want to book flights and accommodations for something that at best is 50/50 to occur. Currently people aren't travelling and you should only do so if it's essential. You need to plan ahead for traveling to a big tournament and I don't think many people are going to feel comfortable booking travel right now. 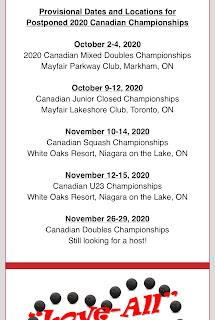 Another major issue I have with the new tournament dates is that these will likely be the first tournaments of the season. How is an athlete supposed to peak for the start of the season after so long away from the courts and competition? You shouldn't be starting a new season with the biggest events. Currently many people around Canada are just starting to solo hit and it's been months since our last match. It could easily be 5+ months of no squash for people hoping to play and compete for a national championship. This is not only going to lower the caliber of play, but it will also come at an increased risk of injury.

No sport wants to have a gap year with no championships crowned, but I think that's what Squash Canada should do; that is actually what will likely end up happening anyways. Will it be safe to have a large grouping together in a club for a tournament by October? Professional sports with unlimited resources like the NBA, NHL and MLB are still trying to figure out how to return to finish their seasons in a safe manner.

As someone who has played in and coached at multiple national championships I know this would greatly impact my schedule for next season. I would like to participate in the masters event and coach at the junior one, but I don't want to get injured and I don't know when I'll be able to start my junior program.

I want squash to come back as much as anyone. Squash is unfortunately a high risk sport for transmission of the virus so I don't think Squash Canada should have bothered rescheduling these events. I know they may very well get cancelled at a later date and they are planning for the best so perhaps this won't matter in the end. I'm normally an optimistic person and I believe in the power of positive thinking, but I think we should be more cautious and realistic in this instance.

It may sound like it, but I don't want to blame Squash Canada for this decision, it's their job to run events. They probably don't see a big issue if they have to cancel later on, but from an athletes and coaches perspective I see a lot of roadblocks with this announcement. I do believe Squash Canada should have consider the planning that this entails for the participants and the lack of preparation time for the athletes and their coaches. For the sake of squash I hope I'm proven completely wrong.

In closing, I've decided to pause the Serious Squash Shop for the time being. With so many clubs closed and people struggling with their finances it's not being used as much as normal. I've since posted the instructional films on the Serious Squash Youtube channel. If you've ordered a new Serious Squash tee, not too worry, it will make it to you shortly! And if you'd like to order one please email me at info@serioussquash.com message me on the Serious Squash Facebook or Instagram account. Squash Shots is still up and running strong. Now that my club is open I will be able to record lots of new solo and on court training drills. You can find out more at Patreon.com/SeriousSquash